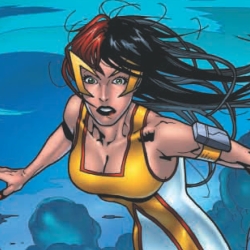 The Hypernaturals are dead, long live the Hypernaturals! Dan Abnett and Andy Lanning are taking BOOM! Studios cosmic, and Major Spoilers takes a look at the latest issue!

Previously, in Hypernaturals: Everyone died. The “Centennial Tour” of Hypernaturals went up against the big bad, a hyper-intelligent villain named Sublime, and he made short work of them using an ultra-powerful pre-human artifact known as “The Nephilim Fragment.” With the demise of the Centennials, a new team had to be put together, consisting of two former members and two new members, who went to search for the missing Centennials and wound up in a trap.

Abnett and Lanning are really trying to create a universe with this, and they’re doing a good job of getting me on board so far. This issue opens with a “Q-Data Link” page which gives a quick rundown of the setting and, in a “Breaking News” blurb summarizes the last issue. That’s followed by an advertisement for people interested in trying out for the Hypernaturals, for those whose hypernatural gift is a 3 or higher (as verified by a registered health care provider). These minor non-story bits really help to establish that this is more than just some words and pictures; the creators are clearly working to establish a universe, and I’m on board. Some of the speech patterns such as the use of hyper in context of “hyper humans” instead of “super humans” strikes me as a bit forced with overuse, but you can’t really fault Abnett and Lanning for committing to this universe.

While last issue began with the defeat of the latest incarnation of the Hypernaturals, the Centennials, this one begins with a flashback. We see Bewilder’s first time out in the field with Clone 45, a member of the Centennials, which gives us a better look at how Bewilder’s powers work.

Following that continues where the last issue left off, and the use of the team’s powers is really enjoyable. BOOM! Studios has done a really good job with their superhero titles of moving beyond the typical DC/Marvel set of superpowers and using new and old powers in creative ways. The blue explanation boxes that Rodrigo mentioned in his podcast review of issue #1 seems to be toned down in quantity in this issue, which is a good thing. The team interaction is enjoyable if a bit standard during combat. Abnett and Lanning are really talented writers though; my favorite piece of monologue in this issue containing the term “ontological ennui” which made me chuckle.

There was one thing story-wise that caught my attention; I’m not sure if Abnett and Lanning just had a typo in the last issue, but we saw a character named Clone 45 as a member of the Centennials in the last issue, and this issue we find that the Clone 45 in the flashback is the former Hypernatural we were introduced to in issue 1, Groman, and the character we saw last issue was actually Clone 46. I’m not sure if Clone 46 took on the title of Clone 45 when he joined the Hypernaturals (especially since’s listed on the Centennial Memorial as Clone 46 in this issue) or if this is an error, but it was a bit confusing.

ART THAT’S OUT OF THIS WORLD

Brad Walker and Tom Derenick don’t always keep anatomy 100% consistent, but overall the art is great in this issue. It’s pure superhero and both artists have a real mastery over characters’ expressions. The flashback sequence has an incredible moment where we see that, while we thought Bewilder and Clone 45 were on a regular planet, they were in fact on the back of some sort of space slug, a similar moment to the classic “living island” bit we’ve seen in literature.

BOTTOM LINE: COUNT ME IN.

Hypernaturals is building an incredibly rich universe for BOOM! Studios, with the potential to be the best title from BOOM! since Irredeemable and Incorruptible. I wasn’t entirely on board with the first issue, but all of a sudden the magic took hold and I got wrapped up in issue #2. There are still a few things that could be improved, and I’m still confused as to the whole Clone 45 / Clone 46 thing, but Hypernaturals gets a strong four and a half out of five stars from me.