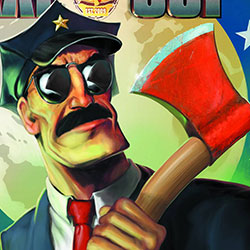 After defeating all of the bad guys on Earth, Axe Cop has been named President of the World.  With no more bad guys, what is the hero to do?  Matthew and Stephen, my two favorite meat bags, return for a look at the cop with an axe.

Previously in Axe Cop: After Axe Cop defeated the Psychic Brothers and the Evil Psychic Magician Woman, he was offered the position of President of the United States, but because his partner, Giant Rat Cop, had already become the President, Axe Cop instead asked that he be made President of all Presidents, that is, President of the World…

MATTHEW: Axe Cop has finally rid the world of all evil, and has little to do in the new world order, so he has turned a small town in Washington into his headquarters, declared that anyone who disagrees is a bad guy, and has (with the help of a little prayer) has made the Earth invulnerable to 1,000,000 years.  So, y’know…  He’s got that going for him.

STEPHEN:  I don’t know why the Robot Overlord assigned this to us.  I’m not a fan of the Axe Cop series, and this issue was more nonsense. I like it when my kid tells me a story, and I like Geek and Sundry’s Written by a Kid series – and maybe it is because those stories have a beginning, middle, and end that flow from point A to point Z smoothly.  It’s great Malachai Nicolle is getting the attention he deserves, and he should be commended for being a comic book writer at such a young age, but I think the thing that this issue needs more than anything else is some tightening up.

MATTHEW: Well, I’ll tell ya, I enjoyed this issue a bit less than the previous ones, but I feel like the problem wasn’t with the writing or the story itself, but the fact that the creators wrote themselves into a corner in the end of the LAST miniseries, when Axe Cop caused all the bad guys to poop poison and die.  With that in play, they couldn’t get back to the best parts of Axe Cop immediately.  This issue spends a lot of time on the question of the villains, and even throws in a couple of Vince McMahon swerves on the topic, before the heroes all disperse.  And, of course, the bad guys take THAT moment to attack.

STEPHEN:  I’m probably being harder on this book than it deserves – after all, readers get not one, but two origin stories in this piece, and save for the bits that only an eight year old could come up with there is logic in how to bring back bad guys to a world without any.

MATTHEW:  You might be.  Honestly, Axe Cop is a stream-of-consciousness story, sort of a Finnegan’s Wake with more decapitations and monsters, and it tends to read better in large chunks.  The ‘Bad Guy Earth’ miniseries made for some awkward transitions, as well, but reads much better in collected form.  What’d you think about big brother Malachai’s pictures?

STEPHEN:  As far as the art goes, I’ve got nothing against what the elder Nicolle brother brings to the table.  If anything, it’s the art that keeps me entertained throughout the issue.  He’s consistent with the look of Axe Cop, Goo Cop, and the monkey that shoots volcanoes out of his butt…

MATTHEW:  Junior Cobbb (note the three Bs in his name, just like my college grade reports) Tee-Hee!  You have to love those type of details.

STEPHEN:  Yes, I did notice that – my point wasn’t the spelling of Donkey Kong’s name in this book, but rather the artist knows how to draw a consistent ape that shoots volcanoes out of his butt.

MATTHEW:  Why ya gotta bust chops?  Still.  I do agree with the assessment of Malachi Nicolle’s art, combining as it does some of the most successful elements of Frank Miller, Phil Jiminez, and Doug Ten’Napel into a unique and coherent whole and I strongly suspect that he’d get attention for his work even without the gimmick of having a child writing the stories for him.  I have less problem with the ridiculous elements of the story, mostly because they’re not really all that much more ridiculous than Thor punching out the Phoenix Force in orbit around the Sun or the Justice League’s battle with Apokalips.  They’re not quite as sophisticated in their expression of the underlying concepts, but the ideas here are fun because they’re strong ones with visual appeal, and the lack of filters (like Axe Cop’s discussions with God or the sudden appearance of a “Gorilla Love” pill) reminds me of how much fun it was to write stories like this myself…

STEPHEN:  I don’t think I’ll ever be a fan of this book, and though I like wacky humor, this isn’t quite wacky, and isn’t quite played straight.  It’s an odd combo that just falls flat with me.  But then again, maybe, just maybe, I’m not the target market – my five year old thought this issue was great.  Robot gun fists aside, Axe Cop: President of the World #1 earns 2 out of 5 Stars from me.

MATTHEW: This really isn’t something that I expected to be up your alley, honestly.  Axe Cop is always presented perfectly straight-forward, with no tongues in cheek or lampshades hung on the tropes in play, following it’s own internally consistent rules.  The biggest flaw with this issue for me came in waiting for the paint that they used to get into the corner to dry, metaphorically speaking, so that we can get back to the meat of things:  Axe Cop chopping the bad guys in half with his axe.  Axe Cop:  President of the World #1 wasn’t the best Axe Cop issue thus far, but I like it a lot, earning 4 out of 5 stars overall.  Turn off the adult part of your brain, and live in the comic book moment, man!

ROBOT OVERLORD:  These two will be fighting over this for the next month, which gives me time to unleash my master plan!