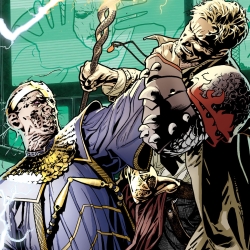 Spurned by Wonder Woman, Steve Trevor has apparently decided to mix it up with another Justice League, and so far it hasn’t gone so well for him. Timothy Hunter is revealed, Zatanna’s slinging the retrograde spells, John Constantine’s smoking and Deadman is… Well, dead. Will Faust truly be triumphant, or will the Justice League Dark manage to foil his fiendish plot? Major Spoilers opens the cover to find out!

Previously in Justice League Dark: Faust was introduced into The New 52, and he wants to get his hands on The Books of Magic. Steve Trevor doesn’t think that’s such a good idea, so he enlists John Constantine–who coerced Zatanna and Deadman into helping–as well as a few of ARGUS’ own magic users to prevent it.

Before The New 52, I just knew Jeff Lemire as “that guy who does Sweet Tooth,” which didn’t really tell me anything because I’ve never read Sweet Tooth, and “That guy who did the really bizarre and confusing Superboy story right before the relaunch,” which didn’t boost him in my eyes at all. Then came Animal Man. Now I’m a huge fan of Lemire’s dark fantasies, and when I heard he was taking over on Justice League Dark–a title that I wanted to love, but just kept falling slightly short of good–and that Mikel Janin was staying on for art, I was ecstatic.

Lemire really shines on the Justice League Dark title, weaving a compelling and interesting story as well as keeping a strong team dynamic. There’s a lot of clever dialogue between characters, and I’m even starting to accept the relaunched Zatanna as not being wholly inferior to her prelaunch self. The reveal of Faust’s plan is slightly expected, though the vessel of that plan was not, and the shot of the inside of The Black Room had me scanning for minute details (the most exciting one being Etrigan’s armor from Demon Knights).

I don’t really know anything about Timothy Hunter, but a quick Wiki-ing just reinforces everything that I learned about him from this issue. Madame Xanadu reveals that he’s the only person who can safely wield the Books of Magic, so she goes off to find him. We get a bit of backstory about an adventure with John Constantine, Zatanna (in a slightly different costume), Xanadu and Timothy Hunter that took place years ago, and I’m wondering if that will be brought up in the #0 issue in September.

In my review of Justice League Dark #1, I raved about Mikel Janin’s art. I’m impressed that he’s been able to keep up the pace on this title, because everything he does is incredibly detailed, and based on the fact that he’s credited as “Artist” he apparently inks his own work, which takes even more time.

The only thing that I don’t like about the art is Janin’s John Constantine; about half the time he draws Constantine with an expression that I can only describe as “dopey,” and aside from hair length I have a bit of trouble telling John Constantine and Steve Trevor apart.

I’d also like to acknowledge the incredible coloring done by Ulises Arreola and Kyle Ritter. The coloring gives this book a soft, mystical feel that backs up the content very well.

BOTTOM LINE: BETTER THAN THE LATEST ISSUE OF JUSTICE LEAGUE