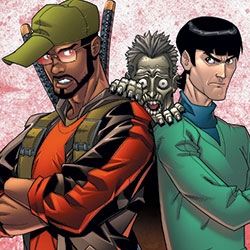 Unlikely partners Nox and Red Reaper have survived the attacks of the deadly EDDA, traversed the post-apocalyptic landscape of the U.S., and formed a rag-tag alliance of former heroes and villains. Now…they plan to strike back.

As San Diego literally crumbles around them, the Wrecking Crew discovers the shocking secret behind the zombie outbreak… The fanboy-favorite series continues, from writer Sam Humphries (Marvel’s ULTIMATES, HIGHER EARTH) and Jerry Gaylord! After last month’s shocking issue, even we don’t know what’s in store for the Wrecking Crew!

Money Talks.
Val and Cassie are two women trying to make it in L.A…who just happened to grow up in a Kung Fu Orphanage, and now make their way in an ultra-competitive world of bounty hunting . They’ve watched each others’ backs since they could stand, and those bonds are tested daily as they navigate a city where loyalty usually only runs as deep as one’s bank account. Val and Cassie take the most dangerous jobs, and watch as others bask in the glory. But now, as their former mentor becomes L.A.’s most wanted fugitive, Val and Cassie will fight through L.A.’s glitziest and grimiest hoods as they learn just what sacrifices are necessary to make Hollywood dreams come true. Rising star scribe Ian Brill (DARKWING DUCK) and red-hot newcomer Joshua Covey team up for this raucous series full of wild nights, beautiful dreamers, and knock-down brawls in between trips to the newest food trucks.

With no one to trust, not even each other, Rex and Heidi must find a way to work together as the agents of Higher Earth come ever closer… Created and written by Sam Humphries (SACRIFICE, MARVEL’S JOHN CARTER: GODS OF MARS, FANBOYS VS. ZOMBIES, THE ULTIMATES) HIGHER EARTH is his sci-fi follow up to last year’s surprise hit OUR LOVE IS REAL — the fast-paced epic of infinite possibilities continues!

Every plan, every option, every Hail Mary pass against Elliott Spencer and his nation-state has failed. His power grows; cynicism and despair flow across the globe like the electricity through Spencer’s veins. Kirsty Cotton’s descent into Leviathan continues, as she decides, once and for all, if she is beyond redemption.

Over the past year, within the pages of CLIVE BARKER’S HELLRAISER, Kirsty Cotton has gone from a human resisting the forces of Hell, to the ruler of light in the darkest of places. Before her battle with former Pinhead Captain Elliott Spencer, she was called to New Orleans by a holder of the LeMarchand Device – a woman trying to end a decades-long family feud by any means necessary… Rising star writer Brandon Seifert (WITCH DOCTOR, HELLRAISER ANNUAL) and red hot artist Ibraim Roberson (UNCANNY X-MEN) unite to tell the story of the first time Kirsty Cotton was called to earth as the new Pinhead! This in-continuity tale reveals Kirsty’s first days in Hell, and how the road there is always paved with good intentions.

Eight years before Astronaut George Taylor fell from the stars…the stars fell on the PLANET OF THE APES! As fragments of the planetary body that once was Earth’s moon begin to fall on Ape City, Doctor Zaius must find a way to bring the survivors together, before panic and fear plunges them all into chaos!

The new Hellfire Club is determined to bring their version of “the future” to Britain – no matter the damage done to the crown. The club has marked for destruction landmarks throughout London, which sends John Steed and Emma Peel on a race against time! Mark Waid (IRREDEEMABLE, DAREDEVIL), Caleb Monroe (BATMAN 80 PAGE GIANT, ICE AGE) and Steve Bryant (ATHENA VOLTAIRE) continue the new adventures of the swinging super-spies!

Thinkwell, Bewilder and Clone 45 begin to discover just how deep Sublime’s scheming runs, as they discover the lone survivor of the cataclysmic event that seemingly wiped out the previous Hypernaturals team…

Join Jake the Dog and Finn the Human as they try to right the wrongs of a Jake-caused TIME PARADOX! If you haven’t checked out the comic book adaptation of the hit Cartoon Network show, there’s no better time to jump into the all-ages sensation!

DON’T MISS THE LATEST ISSUE OF THIS POPULAR ADVENTURE TIME SPIN-OFF MINI-SERIES! Starring fan-favorite Marceline the Vampire Queen and the hit of San Diego Comic-Con. Popular with all-ages and a great way to get girls into your store!

POWER! RESPECT! Based on ADVENTURE TIME creator Pendleton Ward’s brand new animated series! Join Chris, Wallow, Beth and Danny, four 16-year-old heroes-for-hire, as they warp from galaxy to galaxy, saving alien races with the power of their…emotions. They’re noble, righteous and totally bodacious! This new series of original comics based on the new series from ADVENTURE TIME creator Pen Ward is sure to be a smash! ADVENTURE TIME #1 went to an unprecedented 3rd printing…don’t let your shop be caught short for this brand new sensation!

Skip the candy, just give Garfield the lasagna — on second thought, throw in the candy, too! This month, we’ve got two terrific Halloween-themed stories for you! Garfield may be lazy, but offer him free treats, and he’s running to every house in town! The hilarious fun continues thanks to Mark Evanier, Gary Barker and Dan Davis! Ask your retailer about the limited edition Halloween cover! AN ICE AGE HOLIDAY TALE! Recollecting what a huge “help” he was last year, Sid decides to pay Santa and the North Pole a visit and once again offer his assistance for Christmas preparations! Before anyone can stop him, he’s opened a box filled with Santa’s magic…and he finds himself visiting Sids in the past, present and future! A sweet holiday story featuring popular characters from the summer smash ICE AGE: CONTINENTAL DRIFT!

ILLITERATURE…a 2-dimensional world as vast as a page of Bristol board and as timeless as a Las Vegas casino. The middle ground between literature and illiteracy, between science and superstition, and it lies between the hollows of man’s horrors and the heights of his hilarity. This is the dimension of Carol Lay’s imagination, the uncanny land of Illiterature.From the Underground era to THE SIMPSONS comic book to her graphic novel THE BIG SKINNY, Carol Lay has been writing and drawing amazing stories for years. Her Story Minute strip, which gained a devoted following while appearing on Salon.com, is collected here for the first time, in this first in a series of handsome hardcover volumes. Includes an introduction by Kim Deitch.