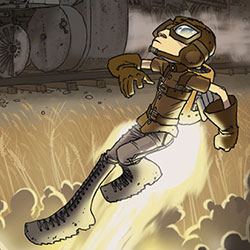 Award-winning graphic novel publisher Archaia Entertainment continues its commitment to Digital First publication, releasing chapters from upcoming books in advance of the print edition through an exclusive partnership with comiXology, the revolutionary digital comics platform with over 75 million comic downloads to date and a selection of more than 25,000 comics and graphic novels. Today, Archaia Entertainment and comiXology announce the debut of two, new, fan-favorite titles debuting digitally in advance of their hardcover collected print editions.

RUST VOL. 2: SECRETS OF THE CELL is the follow-up to the critically acclaimed Rust Vol. 1: Visitor in the Field, the debut graphic novel by Royden Lepp. In this volume, the dysfunctional Taylor family continues to rebuild their farm lives after the devastating loss of a recent war, and the appearance of the mysterious jet pack-wearing boy, Jet Jones. Jet’s behavior continues to raise youngest brother Oswald’s suspicion, particularly when the appearance of another robot invader puts them all in danger! Like its predecessor, Rust Vol. 2 is presented in nostalgic sepia tone to help set the industrial atmosphere of the title. This volume is especially highly anticipated because of the recent announcement that director Joe Cornish (Attack of the Block) has been attached to the Rust film in development at 20th Century Fox. Simon Kinberg (Mr. and Mrs. Smith, X-Men: First Class) is producing and Aline Brosh McKenna (The Devil Wears Prada) is scripting.

SPERA VOL. 2 is the sequel to the critically acclaimed first volume of Spera, which is based off the original webcomic experiment created by Josh Tierney that brings illustrators together from around the globe to showcase their talents as some of the premier fantasy artists in the industry. In this volume, exiled princesses Pira and Lono travel to the bustling city of Kotequog to avoid the clutches of Pira’s mother, the Evil Queen. Obtaining jobs as adventurers, the two best friends set out on a series of quests that land them in perhaps more excitement than they’d bargained for. Told in four chapters and a series of stand-alone shorts, each drawn by a different rising talent in comics, Spera Vol. 2 brings the same gorgeous artistry as its debut installment, featuring the works of Giannis Milonogiannis (Old City Blues), Kyla Vanderklugt (Flight), Timothy Weaver (Chivalrous), and Afu Chan (Spera Vol. 1). Spera will appeal to art lovers and children of all ages, especially fans of The Legend of Korra, Patricia Wrede’s Dealing with Dragons, Disney’s Tangled, and the Flight series.

The first chapters of RUST VOL. 2: SECRETS OF THE CELL and SPERA VOL. 2 debut digitally on comiXology on Wednesday, July 25, 2012, available across iPhone, iPad, Android, Kindle Fire and the Web, with subsequent chapters releasing every month. The print editions will debut late Fall.

Archaia is a multi award-winning graphic novel publisher with more than 50 renowned publishing brands, including such domestic and international hits as Mouse Guard, Return of the Dapper Men, Gunnerkrigg Court, Awakening, The Killer, Days Missing, Tumor, Syndrome, Artesia, The Engineer, Rust, and an entire line of The Jim Henson Company graphic novels. Archaia has built an unparalleled reputation for producing meaningful content that perpetually transforms minds, building one of the industry’s most visually stunning and eclectic slates of graphic novels. Archaia was named Graphic Novel Publisher of the Year in 2010 according to Ain’t It Cool News, Graphic Policy and Comic Related, and was honored with five 2012 Eisner Awards nominations and three wins for Best New Graphic Album, Best Publication Design, and Best Penciller/Inker. Archaia has also successfully emerged as a prolific storyteller in all facets of the entertainment industry, extending their popular brands into film, television, gaming, and branded digital media.

Founded in 2007 with the mission of bringing comics to people everywhere, comiXology — in just five short years — has revolutionized the comic book and graphic novel world. From creating the industry leading platform for digital comics to tools and services for brick and mortar retailers, comiXology has lead the charge in exposing new audiences to the rich history and culture of comic books. With the development of the Comics by comiXology digital comics platform — available across iPhone <http://itunes.apple.com/us/app/comics/id303491945?mt=8> , iPad <http://itunes.apple.com/us/app/comics/id303491945?mt=8> , Android <https://market.android.com/details?id=com.iconology.comics> , Kindle Fire <http://blog.comixology.com/2011/11/08/comixology-ships-on-kindle-fire/> and the Web <http://www.comixology.com/> — comiXology provides the easiest way worldwide for people to enjoy comics at just the click of a button! Regularly ranking as the top grossing iPad app in the entire iTunes App Store, Comics by comiXology was recently selected as a preloaded app on Amazon’s Kindle Fire. Providing digital comics across multiple platforms, comiXology will not stop until everyone on the face of the earth has been turned into a comic book fan.