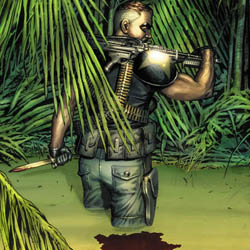 Last month’s glimpse of Eddie Blake in the early 60’s was shocking in all the right ways, leaving our main character destroyed by the events of 11/23/63.  The days of prosperity and hopefulness are ending for The Comedian, and more tragedy is lurking in his future…  Your Major Spoilers review awaits!

Previously, in Before Watchmen – Comedian:  Edward Blake did not kill John F. Kennedy, no matter what Zack Snyder might have you believe, and the night of JFK’s murder was a devastating one for him (and one filled with foreshadowing, as he commiserated with Moloch, the man he would later confide in just before his own murder.)  With the war in Vietnam ahead of him, Eddie Blake is nearing his own moral event horizon, and since we know the destination, this one is all about the journey…

This issue opens just a few months after the last (at least presuming that the boxing schedules were the same in this world, as Cassius Clay’s first title bout with Sonny Liston was in the early Spring of ’64) with Eddie Blake still befriending Robert Kennedy, discussing a number of real-world events and Blake’s upcoming first tour in Vietnam.  Where last month’s interactions felt very real and very integrated to the story, this portion bothers me, for some reason.  The art is pretty gorgeous throughout the book, though, as Cassius Clay, Kennedy and other real historical figures appear alongside the super-types and regular grunts without sticking out, a common problem with these type of stories.  Once we reach the shores of Vietnam, things get even more unpleasant, with Eddie settling in with American soldiers and channeling nearly every Vietnam war movie we’ve ever seen, with the odd exception of Comedian acting like a super-soldier in their midst.  The choice to do this is a puzzling one from my perspective, as the original Watchmen story was almost a repudiation of this kind of superhero activity, and by placing it in a very realistic war setting, the creators have created a very dissonant tone to the book.

The book goes in-depth into the situation in Vietnam, detailing the government’s interactions and activities in Vietnam, including selling drugs to support the war effort, and the story drifts further and further away from Blake and into a more political territory, delivering a story that feels more like a history lesson than it does a comic story.  Given that we’re dealing with an alternate reality to begin with, it’s hard to separate the story being told here (Eddie Blake finding his ‘home away from home’) from the actual Vietnam war as seen in multiple media.  Having been waiting from day one of the Before Watchmen project for the other shoe to drop, I was very disappointed to find the first really unsuccessful story here after what I perceived to be a large success last issue, and with a creative team like this.  Azzarello loses sight of the character in this issue, throwing me completely out of the story by the end of the issue.

Sadly, thought J.G. Jones turns in another wonderful job with the art, the story pulls back too far, creating an alienation from the story for me, serving more as an analysis of the Vietnam conflict than as a single comic book issue.  Before Watchmen: Comedian #2 is a disappointing experience after last issue’s showing, with the real-world aspects overshadowing Eddie Blake’s story to the detriment of the issue, earning 1.5 out of 5 stars overall.  I’m hoping this to be a one-time aberration, but if you were waiting for the first Before Watchmen issue to really drop the ball, I’m afraid this is it…