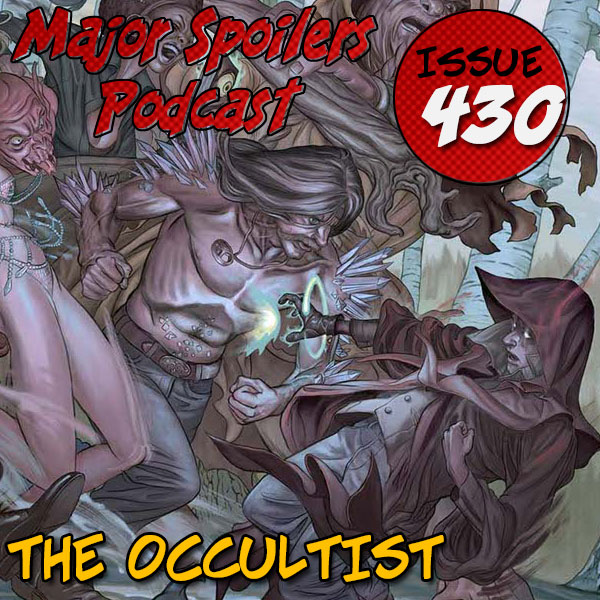 In this issue: The Goon, The Alien, The Bug, and the Undead all appear in this episode of the Major Spoilers Podcast. Plus a discussion of The Occultist, news of Grant Morrison, and more!

We Want You
CODERS

Major Spoilers is looking for YOU! (CODERS EDITION)

Major Spoilers is looking for YOU! (WRITERS EDITION)

REVIEWS
Stephen
GOON #40
Writer: Eric Powell
Artist: Eric Powell
Back in his teenage days when Prohibition was going on, Goon used to hot-rod moonshine past the law for fun and profit. That is, until he ran into a gang of gearhead rockabilly ghouls out for blood!

Rodrigo
RESIDENT ALIEN #3
Writer: Peter Hogan
Artist: Steve Parkhouse
Stranded and living undercover on our planet, the alien now known as Dr. Harry Vanderspeigle races to solve a small-town crime before federal agents close in on him and discover his secret! Biding his time in the sleepy town of Patience, USA, Dr. Harry has masked his existence with a form of alien telepathy. There are those who are resistant to his strange powers, however, and Harry’s time is running out. Someone very close to him is about to blow his cover! Acclaimed creators Peter Hogan (2000 AD, Tom Strong) and Steve Parkhouse (Milkman Murders, Doctor Who) deliver a truly unique sci-fi adventure tale with heart and humor!

Matthew
REVIVAL #1 Writer: Tim Seeley Artist: Mike Norton
For one day in rural central Wisconsin, the dead came back to life. Now it's up to Officer Dana Cypress to deal with the media scrutiny, religious zealots, and government quarantine that has come with them. In a town where the living have to learn to deal with those who are supposed to be dead, Officer Cypress must solve a brutal murder, and everyone, alive or undead, is a suspect. A beautiful "farm noir" that puts a new twist on the zombie genre, created by NYT Bestselling author TIM SEELEY and acclaimed artist MIKE NORTON.

ROB
BLUE BEETLE #11 Writer: Tony Bedard Artist: Ig Guara Paco and Brenda come to NEW YORK CITY to find Jaime – and get caught by the DEO!Superfail continues its smear campaign against BEETLE! BOOSTER GOLD is the only hero to come to BEETLE’S defense – or is it just a trap?!

JIMMY
Finding Gossamyr #1 Writer: David Rodriguez Artist: Sarah Ellerton When a brilliant young boy named Denny solves the most perplexing puzzle in the history of mankind, he and his caretaker sister, Jenna, are transported to the fantastic land of Gossamyr, where math is magic and the boy's unique condition gives him incredible power.

Major Spoilers Poll of the Week
If you are into something specific, there is probably a comic book out there that has you covered. This week, we are keen on learning about your favorite genre of comic books.

Discussion:
THE OCCULTIST VOLUME 1 TPB
Rob Bailey must balance responsibilities as a boyfriend, as a college student, and as the new wielder of the Sword, an ancient book of spells that has binded itself to him. With a team of hit mages hired by a powerful sorcerer after him, it’s trial by fire for the new Occultist, as he learns to handle his powerful magical tome, or suffer at the hands of these deadly enemies. But as he fights for his life, our hero wonders whether he’s wielding this enigmatic weapon, or if it’s the one in control.