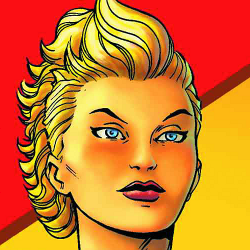 Taking the mantle of Captain Marvel, Carol Danvers is adding a new name, new look, and new series to an already-crowded backstory. Major Spoilers has the review to let you know whether this one feels like it’s going to stick.

DEJA VU ALL OVER AGAIN

The issue opens with an engaging fight with the Absorbing Man lined up versus Captains America and Marvel. The fight scene is enlivened by some peppy dialogue – Crusher Creel is entertainingly stupid, while Cap and Marvel have some funny banter regarding Danvers’ superior rank (if anything, this book should be called “Colonel Marvel, but I digress). The rest of the issue is an exploration of Danvers’ personality as she comes to terms with her own superpowers and evolving identity. This issue does not set up a supervillain for later conflicts, nor does it feature much action beyond the initial fight sequence. What it does do is breathe life into a difficult character, providing a sympathetic and inspiring protagonist while clearly outlining the themes of this book.

It is clear that Kelly Sue DeConnick’s intent is to write a character-driven story. Too often, superhero comics are driven by events, with the characters coming off as little more than action figures plugged into whatever the plot requires. It is refreshing to read a comic that puts the character front and center, and DeConnick handles this task ably. She skilfully provides a distinct voice for each character in this issue, adding in humanizing details like subtle, everyday uses of power while touching on how these powers can also serve to dehumanize a person by taking the risks out of life. DeConnick contrasts Danvers with her childhood idol, an Amelia Earhart-style aviatrix named Helen Cobb. Cobb is Danvers inspiration, but also a reminder that Carol Danvers isn’t quite human anymore. How she chooses to deal with that fact seems to be at the core of this issue. Captain Marvel #1 ends in triumphant fashion, with Captain Marvel streaking towards the stars, reinvigorated and fully confident in her new guise. The moment is one of the more uplifting, optimistic things I’ve seen in comic books in recent memory, and with it, DeConnick creates a rare, fully-earned emotional moment.

I wish I was as enthusiastic about Dexter Soy’s art on this issue as I am with DeConnick’s writing. Soy is a fine artist. His control of the action sequences through dynamic panel layouts and energetic illustration is superb, and he creates realistic looking humans. Unfortunately, the overall feel is somewhat muddy; his colors are dark and smudged, which is at odds with the tone of the book. I think Soy would be better served working with gritty, street-level characters like the Punisher or Daredevil, but this is a hopeful book with cosmic pretensions. Soy is obviously a skilled artist but his talent is badly misused in the pages of Captain Marvel. As for the Captain Marvel uniform, it is a welcome change from the usual cheescake-y costumes of the day. It looks and is functional (even the sash has a use!), and befits a former Air Force officer. The only quibble is with the face-mask that appears at high speeds. I suppose it is meant as a nod to the Kree origins of the character, but it seems unnecessary (as well as a pain to draw in transition). Not to mention it creates a very 80s mullet/Mohawk thing, which no one has successfully rocked besides Bauhaus’s Daniel Ash.

BY ANY OTHER NAME…

One of the trickiest things about Carol Danvers is her ridiculously convoluted backstory made all the more difficult by her constant changes in codename, costume, and seeming identity. Lately, Danvers has been settled as Ms. Marvel, one of the most prominent and strongest members of the Avengers. Captain Marvel adds yet another codename and costume to Danvers already stacked list, but the issue is fresh and inviting to new-comers. Hopefully this identity will stick, as DeConnick has crafted a great beginning and sold me on Carol Danvers as Captain Marvel. There’s been some hand-wringing about Danvers taking on the mantle of the late Mar-Vell, but the issue is handled in a thoughtful way and the change feels good. If the art only matched the writing better, this issue could have easily been a four star debut. As it is, Captain Marvel #1  still gets a very good three and a half out of five stars. Check it out.