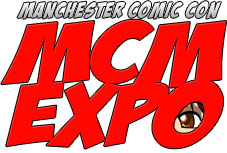 “We were delighted with 2011, but 2012 was so beyond our expectations, ” said Manchester Comic Con co-organiser Bryan Cooney. “We knew we would have a great show but the turnout was even greater than we expected. The atmosphere was wonderful. We look forward to returning to Manchester next year and hopefully an even bigger crowd and hall!”

Bringing all the magic of the famous MCM London Comic Con to Manchester, the North West’s celebration of pop culture gave visitors the chance to meet movie stars and top comic artists; play the hottest pre-release videogames; take part in art and costume competitions and, of course, check out a host of retailers offering great deals on everything from anime to sci-fi collectables.

“Manga loved attending MCM Manchester Comic Con. It was our first, but won’t be our last. It was excellently organised and very well attended,” commented Manga UK’s Head of Marketing & Acquisitions Jerome Mazandarani. “Manchester is an amazing city and its people are warm and friendly. It was a great atmosphere.”

“We attended the show again this year after a successful inaugural show in 2011, and were very pleased to see that MCM had extended the venue and taken a much bigger floor space than the previous year,” said Diamond Comic Distributors’ Marketing Manager Mike Holman. “To say that this year was a success would be a huge understatement! From the opening of the show at 9.30 the flood of attendees didn’t subside throughout the whole day.”

“On behalf of Namco Bandai games I can happily say that not only did we thoroughly enjoy our time at MCM Manchester Comic Con, but it was a great event for showing off our upcoming game Tales of Graces f.,” added Namco Bandai Consumer and Community PR Executive Hollie Bennett. “The venue was great, the fans were brilliant and it’s been amazing to see just how well this show has grown in such a small space of time.”