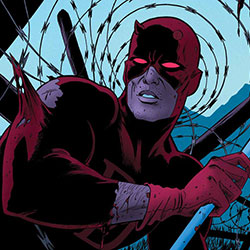 Matt Murdock can’t catch a break. The hero has more life swerves than Peter Parker, and now that he’s had his powers crippled by the minions of Doom, how is he going to cope going forward? Major Spoilers sat down with the new issue, and has a few thoughts about it.

Previously in Daredevil: Having foiled the various crime syndicates with data from the Omega Disk, all should be looking up for Marvel’s favorite blind hero. Doctor Doom sees Daredevil’s actions as financial terrorism, as Latveria was set to launder money from the crime families, and make a mint. Now a guest at Castle Doom, and his mind altered by Nanodroids, the hero can’t make sense of the situation as his senses are completely gone.

Doctor Doom has one goal, figure out how Matt Murdock’s powers work so he can replicate them and use them for his own nefarious deeds. Essentially crippled, Murdock lies in bed a captive of the evil overlord. Except Murdock’s powers seem to be shifting as his vision starts to return, and combined with his regular powers, give the Man Without Fear the means to make a last ditch effort to escape.

From the character stand point, this issue definitely brings the uncomfortable as I can’t imagine being confined to a bed for who knows how long, while being complete incapacitated. Mark Waid captures Matt’s situation perfectly, and the inner monologue mixed with the bits and pieces of conversation that readers see going on in the surrounding rooms, creates an engaging story that makes me want to know what happens next.

My only concern with this power change up is that Mr. Waid may be setting readers up for what is to come in Marvel NOW!, and the mutating powers, while nice every so often, seem to be the go to twist at the House of Ideas.

CHRIS SAMNEE FOR THE WIN

I’ll admit it, I’m a huge fan of Chris Samnee’s art. I like his style that makes use of heavy shadows, and action that is captured mid-move. Samnee understands cinematic motion, and each panel comes off as a detailed storyboard of how this story could be turned into a live action adventure. The only thing that is a draw back are the large number of panels that are devoid of everything in order to convey Daredevil’s total lack of sensory input. I understand why it has to be done, but I want to see more of Mr. Samnee’s art, not pages of black.

I’m so very far behind on my comic book reading, so it took me a bit to get caught up on the Daredevil series, and for the most part, I like what I’m reading. I’m interested to see what Mark Waid has in store for the hero and his new/changed power set, and I can’t wait to see more of Chris Samnee’s art. Mr. Waid has moved Daredevil from a character I could care less about, to a character I want to read more about, earning Daredevil #15 4 out of 5 Stars.