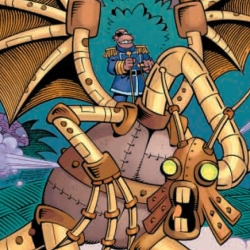 Twas Snarked time and this review’r / did laugh and chortle at the book / But does it avoid the skewer? / Major Spoilers takes a look!

Previously, in Snarked:  Princess Scarlett and Prince Rusty’s father went missing, and the royal advisors who were left in charge of the kingdom (and were also responsible for King Russell II going missing) wanted to take over. Scarlett and Rusty escaped their machinations temporarily by having Scarlett crown herself queen, but when the advisors sent a bounty hunter, the Gryphon, after them, they had to make a hasty exit with the help of Wilburforce J. Walrus and his carpenter friend Clyde McDunk. Now they’ve finally reached Snark Island and found the King, but how will they get home?

ALWAYS RUNNING ON THE BORDER

I’ve been reading Snarked off and on for a while now; I like Roger Langridge’s sense of humor and homages to Lewis Carroll’s work, but as an avid fan of Carroll there are a lot of opportunities for subtle jokes that aren’t taken. On page one of this issue there is a protest going on outside the palace, giving us an opportunity to check back in with the nefarious royal advisors. The villagers are holding protest signs, several of them making reference to the Occupy movement. Rather than making reference to a real-life political movement, this would have been the PERFECT time to reference a lesser known Lewis Carroll work that opens with a protest scene, Sylvie and Bruno–in that scene a confused mob isn’t certain whether they’re supposed to be shouting “Less bread! More taxes!” or the opposite. While Langridge’s “King got shipped out, we got sold out!” sign is clever, I would’ve liked to see even more subtle references for those who have in-depth Lewis Carroll knowledge. While this is indeed intended to be an all-ages book, all-ages DOESN’T have to mean children’s book. The truly great all-ages titles (and this book often does it fairly well) will have references that go right over the kids’ heads without detracting from the story but the adults just eat right up.

That being said, on that same first page there is a reference to Chicago that is clearly meant for the adults that made me chuckle, where a guard who has arrested a protestor that he has clearly beaten and mentions that he “Fell on my club sixteen times before he could cause any trouble.” There’s even another (extremely) obscure reference in that scene as the protestor apparently had “a very threatening looking Satsuma,” which is a citrus fruit but also probably a reference to the Satsuma Rebellion in Japan in the late 1800s. This book does make some nice references, but not enough of the Lewis Carroll references.

BEWARE THE CYBERWOCK, MY SON

This issue contains a lot of dialogue, which I enjoy–I may be in the minority in this respect, but when I get a dialogue heavy issue in this decompressed day and age I typically feel like I’ve gotten more for my money than usual. Yet despite the heavy dialogue, I was left feeling like not much happened to advance the plot in this 22-page issue. The main characters start out on Snark Island, having found King Russell II but not having recovered any of the riches of the Snark’s Cave, and the issue ends with them still on Snark Island and still not having recovered any of those riches, as that task is left for next issue. In the meantime plenty of action happens; The Gryphon shows up and battles them in a giant mechanical Jabberwock, and there’s a nice reference to the lost Baker from The Hunting of the Snark, but for $3.99 I didn’t feel like I’d gotten my money’s worth from this issue. The art was fine for an all-ages title; it wasn’t anything that will knock your pants off, but it’s enjoyable. One thing that Langridge does particularly well is keeping characters moving in the backgrounds of scenes; he never presents the reader with a static panel, and is skilled at conveying action.

BOTTOM LINE: I WANT TO LOVE IT

Snarked is a title that I expected to love as soon as I heard it was announced. I’ve been a fan of Lewis Carroll for many many years now, and have been a fan of The Hunting of the Snark as soon as I read the opening line. I thought this title got off to a fantastic start when I read and reviewed the first issue, but since then I just haven’t been able to appreciate it as much as I want to. I may go back and collect further Snarked arcs in trade format, assuming Boom! publishes them, but for now with its price tag of $3.99 per issue Snarked is getting dropped from my pull list. This issue was enjoyable, but ultimately was just around average–a 3 star performance.