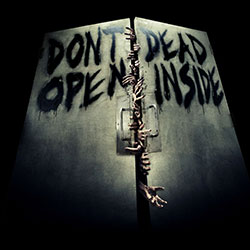 Caught in the middle of a high-intensity struggle for survival, you fight off hordes of flesh-hungry, growling “walkers,” or zombies. No place is safe as you make your way through a post-apocalyptic wasteland with horror at every turn. Will you survive?

This fall, Universal Orlando Resort and Universal Studios Hollywood are joining forces with AMC’s “The Walking Dead” for their Halloween Horror Nights events. Visitors to both theme parks will be able to experience the horror of AMC’s blockbuster original series, “The Walking Dead,” in elaborately themed, haunted mazes. It marks the first-time Universal Studios has featured a television series at Halloween Horror Nights on both coasts.

The Golden Globe-nominated, Emmy Award-winning, series “The Walking Dead” is based on the comic book written by Robert Kirkman and published by Image Comics. The series tells the story of the months and years that follow after a zombie apocalypse. It follows a group of survivors, led by police officer Rick Grimes, who travel in search of a safe and secure home. “The Walking Dead” is the number-one drama series in basic cable history for adults 18-49 and adults 25-54.

Universal Studios’ Halloween creative teams are working with AMC and “The Walking Dead,” to create an authentic experience that is true to the Emmy Award-winning hit series. The haunted mazes on both coasts feature eerily authentic, elaborately designed, movie-quality sets that include some of the most iconic locations and scenes from the show. Mobs of undead walkers bring to “life” the vicious, hungry, zombies from the show.

“We want people to experience the same terror of the walker-filled reality our characters faced in seasons one and two – and will continue to face in our third season,” said Greg Nicotero, Co-Executive Producer and Special Effects Make-up Artist for the series. “Our collaboration with Universal Studios’ creative teams is exciting as we work to truly capture the essence of the show.”

“The collaboration with Universal Studios’ creative teams is a fantastic cross-promotional opportunity and a great way to capture the spirit of the series, which makes its season three debut on AMC this October,” said Linda Schupack, AMC’s Executive Vice President of Marketing.

“With ‘The Walking Dead,’ we want to make fans of the series feel like they are literally walking in the footsteps of the show’s characters, experiencing all of the horrific events from the series just as they experienced them,” said John Murdy, Creative Director at Universal Studios Hollywood. “The goal is to make guests of Halloween Horror Nights feel like they are trapped in the world of ‘The Walking Dead,’ using all of the attention to detail and movie-quality production values that Halloween Horror Nights has become famous for. You’re no longer sitting on a couch, watching a show…you’re living it!”

Universal’s Halloween Horror Nights® events have a more than 20-year history of creating incredibly entertaining, horrifying Halloween experiences that are consistently rated the nation’s best.  The events on each coast feature highly-themed, disturbingly real, haunted mazes based on everything from film to nightmares — and streets filled with hundreds of specially trained “scareactors.”

Universal Orlando Resort: There are many ways to enjoy your Orlando vacation, but there is only one place where vacation becomes adventure:  Universal Orlando Resort. It is a unique destination featuring two theme parks, three magnificently themed on-site hotels and a nighttime entertainment complex. It’s the only Orlando destination where you are not just entertained – you become part of the most exhilarating entertainment ever created. You can soar above Hogwarts with Harry Potter, swing above the streets with Spider-Man, be transformed into a banana-loving minion in the hilarious and heartwarming Despicable Me Minion Mayhem ride and help Shrek save Princess Fiona in Shrek 4-D.

AMC reigns as the only cable network in history to ever win the Emmy® Award for Outstanding Drama Series four years in a row, as well as the Golden Globe® Award for Best Television Series – Drama for three consecutive years.  Whether commemorating favorite films from every genre and decade or creating acclaimed original programming, the AMC experience is an uncompromising celebration of great stories.  AMC’s original stories include “Mad Men,” “Breaking Bad,” “The Walking Dead,” “The Killing” and “Hell on Wheels.”  AMC further demonstrates its commitment to the art of storytelling with its slate of unscripted original series, as well as curated movie franchises like AMC’s Can’t Get Enough and AMC’s Crazy About. AMC is owned and operated by AMC Networks Inc. and its sister networks include IFC, Sundance Channel and WE tv.  AMC is available across all platforms, including on-air, online, on demand and mobile.  AMC: Story Matters HereSM.