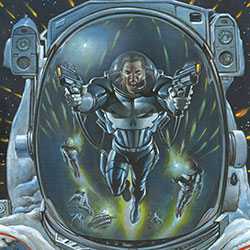 Oh no, somebody gave the Punisher a starship! Space: Punisher recasts Frank Castle as a two-fisted, sci-fi avenger, and Major Spoilers is reviewing his rocket-fueled revenge spree here.

Previously, in the Punisher: Who cares, this is out of continuity.

IN SPACE, EVERYONE MAKES THIS JOKE

Space: Punisher certainly delivers what it promises. This is indeed the Punisher, and the setting is in fact space. The basic setup is similar to regular old terrestrial Punisher – at a certain point in time, Frank Castle’s family was slain and he has sworn vengeance on the perpetrators. Only this time around, Frank is up against the Six-Fingered Hand, an interplanetary syndicate headed up by some remixed versions of familiar Marvel villains, such as Doctor Octopus and the Red Skull. His allies in this fight are a robot named Chip and a ship named Marie, while he’s packing a few space guns, a pretty rad spacesuit and a lightsaber. Oh, and dude’s rocking a cape.

Frank Tieri’s script delivers a predictable plot with the familiar Punisher voiceover. The Punisher kills some guys, goes to a bar to get some information, kills some more guys, and gets attacked for a cliffhanger. If a casual Punisher reader imagined a basic, barebones Punisher plot and threw in a couple blasters and did up the bar like the Mos Eisley Cantina, the result would be much the same. The dialogue can also be astoundingly clunky – “Yo dog… I don’t know nothin’… like I done… already told your ass.” Why is a space alien talking like a clichéd gangbanger circa 1990? Yo dog, I do not know. The premise is pretty over-the-top, but Tieri does not fully commit to the conceit. I would like it better if it was more gloriously stupid, but other than one brief moment where the Punisher creates a black hole with a bomb, everything else is just ray guns replacing Glocks.

Mark Texeira painted the interiors, giving Space: Punisher a nice, pulpy feel. Almost every panel looks like it could be a cover from one of those 50s Space Age pulps. I wish Texeira did more with the “sym-brood-ants” (Venom-styled symbiotes on a Brood chassis), but most everything else looks great. The aforementioned black hole bomb sequence is rendered gorgeously. As Marvel looks to push more of its space-based titles in the future, they will hopefully employ Texeira’s talents. His art is the best part of this issue, rife with funny details (that’s clearly Thanos, and is that Boba Fett over there?), fine texture and smart coloring.

Beyond deploying the Punisher into a sci-fi setting, there is nothing new in this tale. Remix culture is without value if all you’re doing is just fusing things together without adding new meaning. Merely providing an excuse for Frank Castle to swing a lightsaber does nothing innovative or exciting with this character. Ultimately, Space: Punisher #1 is not bad, but it is not particularly good either, and at a $3.99 price point, Marvel should be delivering something more than mediocre. If you want to see the Punisher rack up an impressive bodycount of aliens rather than mobsters or are jazzed about him wielding a lightsaber, this is your book. If that does not interest you, give this book a pass. Space: Punisher #1 squeaks out two out of five stars.