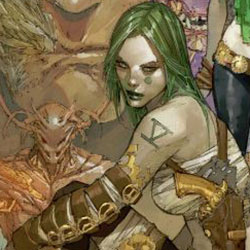 Image Comics and Top Cow Productions are excited to announce the highly anticipated return of CYBER FORCE, in celebration of the title’s twentieth anniversary, in October 2012. Comics legend and Top Cow founder Marc Silvestri returns to the property that helped launch his company and Image Comics as co-writer, art director, and cover artist, spearheading his unique vision for the new series.

And now, CYBER FORCE is embarking on a new path, using 21st century social media to make the first five issues (to be published monthly) available for free, both digitally and in print. A Kickstarter campaign launched on July 17, taking advantage of the year-long build-up of excitement for Image and Top Cow’s 20th anniversary.

Rewards for backers of the Kickstarter campaign, which has a goal of $75,000, include exclusive variant covers, a signed print, a hardcover edition of the collected first five issues, a smartphone case, original art, and one-on-one sessions with Matt Hawkins and Marc Silvestri. There are also several special rewards for comic book retailers who pledge — including exclusive signings by Marc Silvestri! The funding will not only go toward paying the art team but also toward offsetting print costs, thus ensuring the first five issues are available for free.

Excitement has been building for events marking Image and Top Cow’s 20th anniversary since the beginning of the year, including Top Cow’s REBIRTH initiative and exciting new projects from top tier industry talent. With an entire generation of fans who grew up on the series and new fans discovering Image and Top Cow every week, creator and Top Cow CEO Silvestri knew the time was right for CYBER FORCE to return.

“My obsession growing up was sci-fi and fantasy and the concept of Cyber Force has always been ripe for mining those genres,” said Silvestri. “The best sci-fi has its soul anchored in social commentary and the human condition and then goes nuts with the concepts. Comic books are unique in that they can add to that the thrill of wish fulfillment,” he added. “Mash those ideas together add a healthy dose of 21st century paranoia, and voila! You’ve got Cyber Force.”

Silvestri describes CYBER FORCE as an exploration of the consequences when technology — the product of humanity’s own intelligence — has interfered with the order of natural development. “We’re creating a world our species can’t survive in,” Silvestri said. “The end is coming and Mega Corporation Cyber Data Industries knows this when it happens. And now, a young girl named Velocity knows too.”

Joining Silvestri on the new series is interior artist Khoi Pham. Hot off of top-selling Marvel Comics titles including Avengers, Daredevil, The Mighty Thor, and X-Men, Pham’s art will bring to life this bold new vision of CYBER FORCE.

The new series will appeal to fans of the original, as well as reach out to a wider audience by creating a cutting-edge world based on real technology. Co-writer and Top Cow President Matt Hawkins (THINK TANK, THE TEST) will utilize his background in science to lead the series in a never-before-seen direction.

While staying true to the core concept of CYBER FORCE, cybernetically-enhanced resistance fighters on the run from a monolithic international conglomerate, the visual aesthetic of the new series will be updated for a modern audience coined “bio-cybernetic steampunk”.

ABOUT CYBER FORCE
With over 100 million comics sold in 21 languages and 55 countries around the world, CYBER FORCE is Top Cow’s best-selling comics property and has spawned numerous characters, single issues, and collections, along with toys, statues, posters, lithographs, trading cards, and other merchandise.

ABOUT TOP COW PRODUCTIONS
Top Cow Productions, Inc. (www.topcow.com), a Los Angeles-based entertainment company, was founded in December of 1992 by artist and Image Comics founder Marc Silvestri. Top Cow currently publishes its line of comic books in 21 languages in over 55 different countries.Its flagship franchise, WITCHBLADE, was TNT’s #1 original film of 2000 and the subsequent TV series was released on DVD in 2008.  WITCHBLADE is also the first American property to be fully adapted in Japan as an original anime and manga by Studio GONZO in 2006. Top Cow’s other flagship property, THE DARKNESS, was developed into a major next-generation video game release by Starbreeze and 2K Games and achieved platinum sales status. WANTED, an Eisner-nominated miniseries published by Top Cow from 2003-2005, is now a major motion picture from Universal Pictures starring Angelina Jolie, James McAvoy and Morgan Freeman.