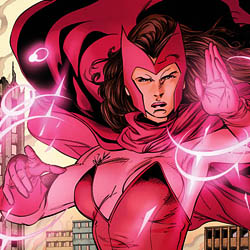 REVIEW: Avengers vs. X-Men Round 8

Last issue, Namor disobeyed Cyclops’ orders and followed the spoor of Hope to Wakanda, where the Avengers have been hiding out.  Can even Earth’s Mightiest Heroes combat the power of the Phoenix?  I wouldn’t bet the rent.  Your Major Spoilers review awaits!

Previously, on Avengers Vs. X-Men:  Phoenix has returned to Earth, and the power has been split between five X-Men, who have set about curing disease, relieving hunger and beating the bajeezus out of the Mighty Avengers.  (Hey, nobody’s perfect, right?)  The Avengers have made strongholds  in the secret hidden city of K’un Lun (which is probably why Iron Fist joined the team back in the day, given the foresight in plotting that Marvel editorial has these days) as well as the Black Panther’s nation-state of Wakanda, but one-fifth of the Phoenix Five, Namor the Sub-Mariner, has tracked them to their lair.  I suspect it’s time for the fighty-fighty…

Namor’s attack on Wakanda is horrifyingly savage, treating the entire city-state as an enemy, shattering buildings and engulfing innocents and heroes alike.  Captain America takes the attack as a declaration of war on a sovereign nation, and calls in his team, bringing the battle to Namor.  I like the historical reference here (Namor similarly flooded New York back in the Golden Age, where there were no consequences) but as effective as the storytelling is, I laughed out loud at the panel where Namor is confronted by the most powerful and experienced Avengers…  and Daredevil.  Page after page of battle follows, with Cyclops suddenly realizing that one of his lieutenants has gone rogue (and, seemingly wondering about the allegiances of Emma Frost) and heading out for Wakanda.  I’m bothered by the first half of this issue, and find it to be rather poorly paced overall.  While The Black Panther and The Thing do have a couple of nice lines of dialogue, the breakdown of this book is indistinct fight sequences, while Iron Man ominously mentions their “secret weapon” while splitting for kung-fu-ville.

AND, IT GETS WORSE…

The Avengers finally manage (thanks to the Scarlet Witch, whose powers have, since 2003, been entirely plot-driven) to bring Namor down, and are shocked to find the Phoenix fleeing Subby’s corporeal form.  This has the unfortunate effect of returning his 20% of the power to the OTHER four Phoenixes, leaving each of them noticeably stronger (and probably revealing how this whole mess is going to wrap up, if you know your story tropes) and the Avengers exhausted and demoralized.  I’m not enamored of Adam Kubert’s art in this issue, as it feels a little retro, reminding me far too much of the ‘Bloodlines’ and ‘Age of Apocalypse’ crossovers of the 90’s, especially in the second half of the issue.  Professor X makes a quick appearance to try and bring his former student back in line, but the major effect of this issue seems to be nothing more than property damage.  Add to the fact that the plot feels very padded (it’s half an issue’s worth of material, in my eyes, though it does allow for some nice double-page spreads of chaos and Wanda) and Round 8 seems to be awarded squarely to the forces of entropy.

THE BOTTOM LINE:  NOT AS MUCH FUN AS THE LAST TWO.

All in all, we’re 3/4ths of the way through the crossover, with cracks starting to show in the now-Phoenix-4’s united front, and the seeds of the end starting to bear fruit.  But, in the hurry to raise the stakes, we’ve gotten away from the human element that made the first half (and, honestly, the good crossover issues) of AvX worth the time.  On the plus side, we don’t have a big gap in time since last issue, something that has been bothering me for the last couple of issues, and much of the dialogue in this issue is quite fun, especially Spider-Man’s quips in the face of disaster.  Avengers Vs. X-Men #8 is a good comic with some flaws, not quite up to the best of this series, but still above average in terms of reading enjoyment, earning 3 out of 5 stars overall.  As we transition into the Next Big Thing and AvX winds down, I hope that we’ll see more of the unexpected twists we got earlier in the series, and not so many of the required “movie blockbuster” moments that pull this particular comic down…