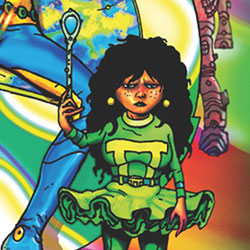 Continuing their new partnership with legendary English publishers 2000 AD, IDW Publishing is proud to announce a collection of Al Ewing and Brendan McCarthy’s THE ZAUCER OF ZILK!

Dimension-hopping onto comic stands this October, THE ZAUCER OF ZILK is a story that simply must be seen to be believed. The two oversized issues of ZAUCER are bursting at the staples with McCarthy’s brilliantly vivid art and he and Ewing’s fantastically ambitious story, taking readers on a wild, phantasmagorical journey across unique worlds with characters that are colorful to say the least.

“Before the main event of our Judge Dredd partnership begins in November, it’s a blast to also work with 2000 AD in bringing the gorgeous insanity of McCarthy and Ewing’s creation to readers here,” said Chris Ryall, IDW’s Chief Creative Officer/Editor-in-Chief. “The colorful wonderment Brendan McCarthy worked on the ZILK pages is already embedded in my eyelids forever, and I can’t wait for readers to experience the same thing.”

“I was immediately captivated by The Zaucer of Zilk when Brendan and Al first pitched it to me, and had sensed even then it would be something special. It’s great to see the Zaucer’s worlds reach an even wider audience through IDW,” said 2000 AD Editor Matt Smith.

When a despondent, alienated young man finds himself in a mysterious Technicolor candy shop, his world changes forever! Thrust into the magical, psychedelic world of Zilk and finding himself atop the throne of the legendary Zaucer! Mind blowing adventure abounds in the wildly imaginative way that can only the creative genius of 2000 AD and their creators can cook up, and IDW is proud to bring ZAUCER OF ZILK’s fantastic trip to American readers!