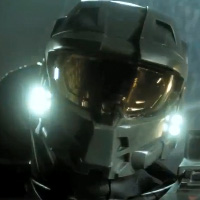 If you have been following the ups and downs of the Halo franchise since its beginning in 2001, you were excited for the idea being tossed around a few years ago about a movie treatment and then disappointed when it was canned. But now, in the year of Halo 4’s release, there will finally be a filmed adaptation of the series. It won’t be coming to the big screen or even the small screen, however. Take the jump and see what is coming.

A trailer for the coming internet mini-series was debuted at ComiCon, so let’s watch it together now.

Give me a second while I go change my pants.

Alright, I’m back. Holy S#&*#!! Does that look super kick-ass or what? Maybe I’m going a little fan boy due to my love of Halo, but that looks top-notch. I really like the idea of focusing on the kids being trained to join the military instead of the Spartan program. Story wise the series takes place at the start of the Human/Covenant War and revolves around a student who is inspired by Master Chief and later becomes a leader abord the UNSC Infinity.

The series director, Stewart Hendler, said that he will stick true to the game’s detail and legend and gave this quote:

I wanted to bring a sense of reality and gravity to the world. Everything from the performances to the aesthetics should be tethered to a sense of authenticity and grittiness.

Halo 4: Forward Unto Dawn will hit the web October 5 on Machinima’s Youtube channel and will release a new episode every week leading up to the release of Halo 4.