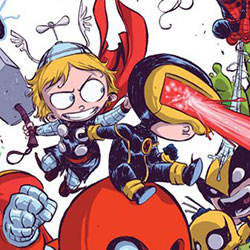 There were rumors floating that Marvel didn’t reveal several important titles coming out in October that tie into the Avengers vs. X-Men fallout. Marvel has revealed the first hand full of those books, and who is involved.

Coming later this year, A+X will showcase an array of Marvel’s top characters, including Wolverine, The Hulk, Captain America and Cable to start. On the creative side, Jeph Loeb, Dan Slott, Dale Keown and Ron Garney will be among early contributors, per Marvel Senior Editor Nick Lowe. “[MARVEL NOW! POINT ONE] will have multiple stories unified within a larger framing story, all of which will give portents and clues about stuff that’s coming down the pike in Marvel NOW! and even after,” says Marvel Senior VP – Executive Editor Tom Brevoort. “Most, but not all, of the stories contain specific set-up elements for the characters and series involved, produced by the creators working on the books themselves. It’s a cornucopia of talent.”

The only characters confirmed to be involvied in MARVEL NOW! POINT ONE for the time being will be Nick Fury Jr., the son of the original Fury and new operative of SH.I.E.L.D. introduced in the BATTLE SCARS limited series. Marvel Senior Editor Nick Lowe remained uncharacteristically quiet on the subject of the mysterious AVX: CONSEQUENCES, other than to say, “It deals with the effects of AvX on both the X-side and the A-side!” and that he could not comment further “without spoiling AvX!” Avengers Vs. X-Men gets a new perspective from Skottie Young and Guruhiru in the A-BABIES VS. X-BABIES one-shot coming this October! Stay tuned to Marvel.com for more information. What else is on the way? Minimum Carnage still hasn’t been completely spelled out yet…