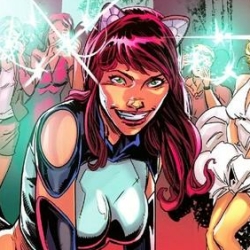 Cassia Crawford, aka Critter, has donned the cat ears and tail of her superhero mother and now is joining a new super-team in this debut issue of Big Dog Ink’s first ever monthly ongoing comic book.

Previously, in Critter:  I don’t know. I’ve never read an issue of Critter before, but here’s what the inside cover has to say: “Cassia Crawford is a legacy super hero who’s [sic]mother was one of the most powerful telekinetics on the planet. Now she dons her mother’s ears and tail as she takes to the streets to help people in need. Critter joined the C.O.R.E., her mother’s former team. There she was taught to use her powers while also attending college. Critter was dropped into the deep end of the super hero community and fought to stay afloat. But now she is on her way to Los Angeles to join her new friends… Purrrfection!”

The first page of the issue begins innocuously enough, giving new readers a quick introduction to the character as a young girl, explaining how she was a normal girl like any other, except for the fact that her mom was a superhero. However, one of the panels in this sequence dedicated to proving how normal she was shows her playing football and tackling someone who is wearing a football jersey, pads and a helmet, while Critter is wearing what appears to be jeans and a midriff-baring t-shirt, and no head gear, which isn’t really what I’d consider a “normal” occurrence.

The next two pages are dedicated to a very Batman-esque sequence where Critter stands over “her” city and goes to fight some baddie. The monologue during this as well as the exchange between Critter and the baddie seem very forced and formal, like Hutchison was trying too hard to write superhero/villain dialogue and coming up with a tray of cliches. I was just about to write this book off, when Critter wakes up revealing those two pages were a dream sequence, and thankfully the cliché dialogue is relegated to the dream world as the writing gets considerably better.

This is my first exposure to one of Big Dog Ink’s premiere superhero titles, and honestly at first it felt a bit like a Zenescope title. There are a lot of women in this comic, and all of them are drawn in a typical comic book sex appeal fashion. Critter is apparently joining a new superhero / publicity team, “Purrrfection” where all the members are cat-themed, which is convenient for Critter since she derives her powers from a pair of cat ears and a tail. The Purrrfection team is very cognizant of their media presence, which explains why their costumes are so sexualized, but it doesn’t really explain why they have a stripper pole in their headquarters (other than, I suppose, for team member “Pole Kat” to validate her codename with).

Big Dog Ink was kind enough to send Major Spoilers a review copy of Critter #1, which is already out in comic shops (if your local store doesn’t stock it, they should be able to special order you a copy), but unfortunately they sent it in a PDF where they had shrunk the pages down so that two pages fit vertically onto each page of the PDF file. Because of the poor image resolution of the review copy, I really couldn’t appreciate the art as much as I would’ve liked to, but from what I can tell, artist Fico Ossio is extremely talented at drawing emotion into characters’ faces. In fact, most of the art in this is really good (and the coloring is vibrant and evocative of the superhero genre), but every now and then there are some simple anatomic discrepancies that hopefully Ossio will learn to avoid as he develops as an artist; as Critter looks at a giant Purrrfection advertisement on a building she is shown in a classic example of a bad comic book sexualizing pose, sticking her butt out and arching her back above an impossibly tiny waist, ironically saying “Gadzooks. This is a little over the top” as she drops her spoon. Overall I like Ossio’s art and his eye for framing a scene, but the sexualization is too reminiscent of Zenescope Entertainment’s titles for my taste.

The story in this issue is nothing we haven’t seen before, but that’s not unexpected given that it’s a superhero comic. Hutchison’s writing shows a lot of diversity in tone between scenes, and is a very different entity from the other Big Dog Ink book I’ve read, “Wicked West: The Legend of Oz.” Ossio’s art has potential, and since this book is a monthly ongoing series I’m hoping that this book will really help him hone his craft. Overall, while I see a lot of potential in this series, this issue is just average, garnering 3 of 5 stars.