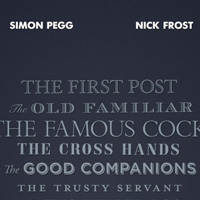 MOVIES: The World’s End is coming

The third film in Edgar Wright’s Blood and Ice Cream Trilogy has received the green light from Universal and already has a poster for the lucky folks out at San Diego ComiCon. Check it out after the jump. The World’s End will star Simon Pegg and Nick Frost as their characters make their way through a pub crawl, with the pubs’ names displayed on the poster. I’m hoping that just to make the Blood and Ice Cream Trilogy more epic that The Winchester is mentioned at least in passing during the film.

Principal photography will be starting this fall with a release date yet to be set in 2013.