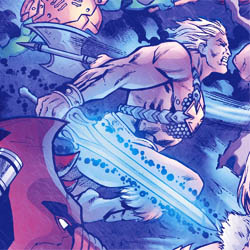 Or – “The Biggest Question: Will They Use Orko?”

“I am Adam, Prince of Eternia and defender of the secrets of Castle Greyskull.  Fabulous secret powers were revealed to me the day I held aloft my magic sword and said: “By the power of Greyskull!  I have the Power!”  I became He-Man, the most powerful man in the universe!  Only a few others share this secret… Our friends: The Sorceress, Man-At-Arms and Orko.  Together we defend Castle Greyskull from the evil forces of Skeletor!”

Did anyone else think that He-Man sounded just like Morris the Cat?

Previously, in He-Man And The Masters Of The Universe:  Harnesses, fist-fights and fuzzy drawers, plus enough homoerotic subtext to launch a thousand slash-fics.  Say it with me:

“BY THE POWER OF GRAYSKULL!!!”

Having read the original DC Masters of The Universe comics recently, I wondered whether this series would relaunch the He-Man story (which, even though the cartoon depicted it somewhat simply, has a lot of decent hooks and characters) or perhaps join the characters already in progress.  James Robinson zigged on me, opening the story with a mighty battle between He-Man and his forces and the evil armies of Skeletor…  before a much-less-mighty Adam awoke from his dreams of battle and glory.  The reveal that Adam is nothing more than a penniless woodsman, caring for his ailing father is a little bit unnerving, leaving me unsure whether we’re even going to see any reference to the previous incarnations of the character at all.  Adam’s dreams become more and more compelling, and he sets out to prove Joseph Campbell right, seeking his destiny outside of the woods.  With his dreams still fresh in his mind (and a mysterious but familiar-colored hawk that he somehow knows is called Zoar) Adam sets out, with his axe on his back, to find out what is really going on.

“AND, FOR SOME REASON, NORM FROM CHEERS!”

What’s going on turns out to be a monstrous creature, part-beast, part-man (a Beast-Man, if you will) who attacks him to keep him from leaving the woods.  The battle proves that Adam knows a bit more about combat than even he suspected, and also establishing that we’re not dealing with the bumbling Lou Costello Beast-Man from the Filmation cartoon.  Their battle is bloody, and well-drawn by Philip Tan, with great detail given to the monstrous-but-still-recognizable design of Beastie.  The battle ends with a stunned Adam having defeated the creature, but with many questions, the most important being ‘Why did Beast-Man want him not to leave the forest?’  We end the story with the first big reveal (Raise you hand if you know who Keldor is) and a cliffhanger that makes it clear where this story has to take place, chronologically.

THE VERDICT: A TOUGH SELL, BUT A DECENT STORY.

There are, in my experience, multiple kinds of James Robinson stories.  There is the Robinson who created the sublime Starman, which takes cast-off bits of history and ephemera, and welds them into a seamless continuity which creates its own reality.  And then, there’s the Robinson who gave us ‘Cry For Justice,’ a tale which makes the Justice League alternately thuggish, unpleasant and useless, while killing the most sympathetic characters in what felt like a transparent bid for relevance.  Thankfully, He-Man And The Masters Of The Universe #1 bears more resemblance to the first example, treating thirty years of backstory with respect, and positing a mystery about what in the world has happened in Eternia, earning a hopeful 3 out of 5 stars overall.  If this book continues being this interesting, I’d welcome it becoming an ongoing series…