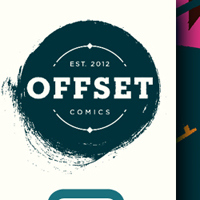 Last week saw the introduction of new comic publisher MonkeyBrain Comics, and it now seems that another company will soon be dishing out new comic love on us all.

Ivan Brandon (Men of War, Viking, Doc Savage) tweeted this out to his followers late on July 5th.

for the late night crowd: i have something for you http://offsetcomics.com

Later, he went on to say that the link had been sent out to over 1 million people, but what did every person see when they followed the link? This. That art is, as Matthew would say, worth the price of admission for what ever book it belongs to. Little else has been said (besides derivatives of “Coming Soon”) about what to expect from the new comic company, but I’m always excited when new players come on the scene. More publishers creating original content simply means more comic goodness for us all.

We’ll keep you posted here at Major Spoilers when more information comes out.