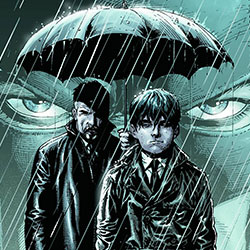 Even amidst a new DC Universe, the company is telling new origin stories not set in the current main continuity. The latest arrived this week, and Major Spoilers has your review of Batman: Earth One.

Previously in Earth One: The concept of Earth One goes back decades, when it was decided that a multiverse needed to be created to help usher in a new age of younger readers who could identify with younger heroes. The multiverse at DC Comics certainly had its ups and down, until eventually it all collapsed in on itself, never to be seen again. That is until DC launched the Elseworlds series, brought the multiverse back in 52, and then rebooted it completely with the New 52. Though it isn’t supposed to be a part of any continuity or any known Earth in the New 52, Superman: Earth One proved that a wide range of readers would pick up a new origin story in droves, thus leading DC to give the green light to Batman: Earth One.

I have a feeling that Geoff Johns has always wanted to get his hands on Batman and really do it up in a way that more closely matches his vision for the heroes of the DCU. but save for a hand full of one shots and short stories, he’s never had a long run on anything related to Batman. With the success of Superman: Earth One, it makes sense that Johns would land the follow-up hero tale on Batman.

Batman: Earth One tells yet another origin story for Batman, this time set against the background of government and police corruption through Gotham City. In this story, Thomas Wayne is running against the corrupt Mayor of Gotham, and death threats have been made. Thomas, having fought in many wars, calls in old friend Alfred Pennyworth to be the head of security during the campaign, but before he can begin fully doing his duties, the death threat plays out, leaving young Bruce Wayne an orphan, with Alfred named has his legal guardian.

What follows is a revenge driven plot that turns the young boy into a masked crime fighter bent on finding out who was behind the murders, and it eventually comes to a head where Batman comes face to face with the corrupt mayor of Gotham, Oswald Cobblepot. As a stand alone story, it is an interesting one. The reasoning behind Batman’s origin are solid, and each change Johns makes to the characters in the book are believable as well. I especially like the changes made to Alfred Pennyworth and Harvey Bullock. While Alfred is known to have a military background, here Johns turns the war veteran into a one legged gun for hire, who ends up becoming a butler out of necessity, while Harvey Bullock loses about 100 pounds, turning into a slick television personality fresh from a stint on the Hollywood P.D. newly arrived in Gotham to make a new name for himself. Even though characters like Bruce Wayne, Jim Gordon (not Chief of Police here), Barbara Gordon, and other recognizable names and faces have tweaks made to their stories, none go through as much change as Alfred and Harvey. And both of these characters have some dramatic moments that really change the mood of the book as Alfred unloads with a shotgun, and Harvey learns what the face of real evil looks like. For whatever reason, when I was done with Batman: Earth One, it felt more like a ‘70s crime-noir story than something one would expect to see coming out of DC right now.

There are a few problems in the story, but I think that is the nature of the book. Several plot points go unanswered, and questions on Bruce’s training are left unanswered. Sure, it is probably there in case DC approves a second installment of this series, but they were frustrating as I read through the book.

THE ART OF BATMAN

Gary Frank’s art brought me back to a time when I read Batman and everything Batman related like a crazed junkie. Franks work on Birds of Prey and the Supergirl series always impressed me, and I followed him over to finish out the Image Comics’ run on Gen13. I’m not going to dig back into the old issues for comparison, but from what I can tell, Frank’s work has only improved over time.

Frank’s take on each of the characters is visually stunning without going over the top with cartoon goofiness. The Penguin is both an imposing and disgusting character, and though he has a beak that matches his name, Frank doesn’t let the character devolve into a Danny DeVito horror. The stitching and detail Frank draws into Batman’s costume also works well – in fact, Frank fills the panel with enough detail that I found myself reading through the book a third time just to look at the little details and nods scattered throughout the book.

BOTTOM LINE: Check It Out

I’ve always been a fan of the Elseworlds series that DC put out over a decade ago. It gave creators a chance to tell stories of their favorite characters that weren’t in continuity, or if they were, the stories took place on a different Earth. Batman: Earth One is the Elseworlds series under a different name. It’s a safe place to tell a story without upsetting the plethora of fans who have invested in a prime continuity (either with 52 or before). Geoff Johns has told a story that is solid enough for a one shot, and Gary Frank’s art dazzles. I would like to see more, but not in a hardcover format. This book would have been much more appealing to me and possibly other readers if it were done up in the prestige format DC used to do for books like these. If you are a Batman fan who is looking for yet another origin story, I say check out Batman: Earth One. It’s an interesting story and earns 4 out of 5 Stars.