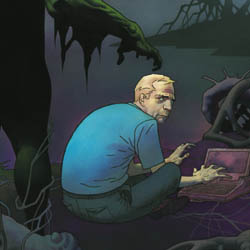 Or – “I Didn’t Realize This Was A Steve Gerber Story…”

Whatever knows fear BURNS at the touch of the Man-Thing…  Better hope there aren’t any spiders or snakes in here, because your Major Spoilers review awaits!

Previously, in Infernal Man-Thing:  A long time ago, comic books weren’t all about Batman, Spider-Man and guys with X’s on their belts.  There used to be a market for westerns, for war comics, and especially for horror anthologies.  By the 1970s, the horror comic made a momentary rally for dominance, and Man-Thing’s adventures were among the forefront of thoughtful horror tales, thanks to the writing of Steve Gerber.  One of those stories was “Song-Cry of The Living Dead Man,” featuring Brian Lazarus, a character Gerber enjoyed enough to craft a sequel for.  That sequel never came to fruition during Steve’s life, but now, the story is being presented as a tribute to the late author…

The first page reveals something I hadn’t expected:  Nowlan’s avant-garde take on the Man-Thing has the bog-beast looking stranger than usual, almost cartoon-smooth and hump-backed.  Strangely, it only takes a few pages to get used to the different shape of Manny, as Gerber’s story takes off quickly, with the monster literally being struck by an anvil from the sky.  The anvil is quickly revealed to be an artifact of the creature’s empathic nature, a representation of the madness of Brian Lazarus, returning to Florida in order to try and tap into his lost creativity.  Nowlan’s subtle water-color work is particularly lovely, and the tale of Brian’s lost years is horrifying in it’s mundane unpleasantness.  The best Gerber stories always carry an air of paranoia and alienation (read some of the classic Howard The Duck, if you haven’t, they’re frickin’ awesome) and this issue carries that, mixing it with potent metaphors for insanity.

MORE THAN A LITTLE AUTOBIOGRAPHY.

Lazarus spent time working in Hollywood, writing for cartoons and game shows (like Gerber himself) and I’d say it’s fair to assume that some of Brian’s vitriol is shared by his creator, especially the harsh thoughts about the banality of Hollywood and the creative bankruptcy of television and movies (a sentiment that’s more true now than it was years ago, when the story was written.)  The only real complaints that I have about the book are the breakdown of the story, as Brian’s tale breaks in a very awkward place, as though the book were aribitrarily split into thirds for limited series format.  The book also reprints the first part of Brian’s original appearance from the 70’s Man-Thing book (with some lovely art by John Buscema and Klaus Janson) but it, too, cuts off oddly, nearly in mid-sentence.  Even so, I’m entertained by this issue, an old-school story told at a time when the charms of old-school seem more important than ever…

THE VERDICT: AND I *LIKED* IT!

It should probably come as no surprise that this issue appeals to me, coming as it does from one of my favorite writers, and serving as a sequel to a story that I very much enjoyed when I discovered it in the mid-1980s.  Infernal Man-Thing #1 may be buoyed by nostalgia, but the craft is strong, with some very peculiar and charming art from Nowlan and a story that reminds me of Gerber’s strongest works, earning 4.5 out of 5 stars overall.  This comic has made me want to dig out my old copies of Man-Thing Volume 1, including the much-giggled-over Giant-Size issues, and read through them again this weekend, which sounds like an excellent plan…