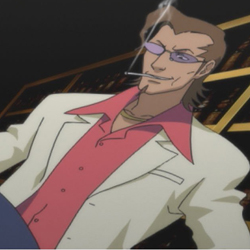 FROM THE VAULT: Speed Grapher

Speed Grapher is an anime series, here is Netflix’s description of it:

A former war photographer meets a beautiful girl whose powers unlock a secret within him: Whenever he takes a picture of something, it explodes.

Actually this anime is pretty good. A little slow at times but overall entertaining. Really Speed Grapher only has two major problems, one being the terrible blurb used to describe it (and the extended one on Netflix’s site is a little better, but still pretty bad.) And the other is that it’s actually two shows crunched into one.

I can only assume that anyone that’s watching Speed Grapher right now is doing so because they heard positive reviews of it, or like me, because they think it’s going to be so bad it’ll wrap around back to good. But I think most people who read the blurb will be turned off by the goofy premise (which does not match the tone of the show) So I humbly suggest that they switch to this one:

Tetsumi Saiga, a retired war photographer gets caught up in the machinations of Tokyo’s underworld. But as he unravels its mysteries he begins to discover he has much in common with the charming devil who controls it.

Sex, Science and the Supernatural come together in this action-packed psychological thriller.

or maybe this one.

How did one man gain control of all of Tokyo? Was it through bribes? Blackmail? or was it something metaphysical? And what part does 15 year-old Kagura have to play in this twisted tale? Speed Grapher is an anime series that asks the question “What happens when we get what we really want?” The answer will definitely disturb you.

Now, I just wrote those without any problems, how? TALENT! But also because all that stuff is there in the show. It IS a gritty and complex thriller! It IS a mob story AND a sci-fi story! And it’s all actually pretty good.

Unfortunately it’s second issue is one that I can’t fix without a lot of editing (and even then it probably wouldn’t quite work). Speed Grapher is actually two shows, one about people who gain crazy superpowers and another about a man with emotional issues butting heads with a powerful hellfire club. In fact if you took out all the Bloodstabbing, Dentaldemoning and Speedgraphing you would be left with a really strong organized crime story.

And really that’s why Speed Grapher is pretty good, but not great. It moves too slowly to be a sci-fi monster of the week action fest. While simultaneously having its gritty crime drama story constantly interrupted by guys with BOSE systems for heads. PLUS! It actually is a show about a guy who blows things up by taking pictures of them…

FINAL VERDICT: BETTER THAN IT SEEMS

That said though, if you actually stick it out Speed Grapher will reward you. Its circuitous plot will deliver you to that final confrontation you hope for, but not without making you question whether the bad guy is more deserving of victory. I’m giving this one three stars! Above average, a pleasant surprise, but in the end a little too schizophrenic for its own good.