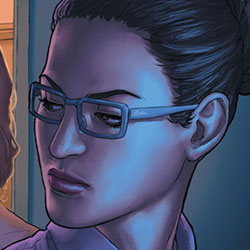 Artifacts #19
“PHANTOMS OF THE HEART”, PART 1
Tom Judge, a former priest-cum-FBI profiler and bearer of the Rapture, and his partner Tilly Grimes track down another Artifact bearer – a doctor. But this trip to the hospital may prove fatal for one of them.

Creator-Owned Heroes #2
“TRIGGERGIRL 6,” Part Two
by JIMMY PALMIOTTI, JUSTIN GRAY & PHIL NOTO
In this sci-fi thriller, Triggergirl hits the ground running, fighting her way to the White House to assassinate the President of the United States. Can nothing stop this one woman killing machine?

“AMERICAN MUSCLE,” Part Two
by STEVE NILES & KEVIN MELLON
Facing the realization that he has led the gang to a dead end, Gil takes matters into his own hands. Unfortunately, heading into a mutant infested desert my yourself leads to big, nast trouble.

PLUS! An interview with PAUL POPE, a PHIL NOTO art gallery, con photos, and original articles all celebrating the creator-owned spirit!

Danger Club #3
The bodies begin piling up as the world’s governments move against the forces of the teenage superheroes. Meanwhile, Kid Vigilante is concerned about the link between Jack Fearless and the President of the United States.

Epic Kill #3
She’s walking death. A goddess of carnage. Bare-handed she’s unbelievable but put a gun in her hand? You’d have to be out of your mind. Elsewhere… the newly elected Prez is accused of fraud on Election Day by the candidate that lost.

Haunt #24
It’s mayhem on the streets of Manhattan! A relentless creature of fury andfire running amok! Only Haunt can save the city from an apocalyptic end! But at what cost? The new nightmare rolls on in 2012!

Invincible #93
More secrets about Robot’s and Monster Girl’s time spent in the Flaxan Dimension are revealed. Meanwhile, in the present – things go to hell, and the new Invincible has to prove if he’s worthy of the mantle in the face of… INVASION.

Jim Downing is a man possessed by a hellish power he cannot control, by a heavenly secret he doesn’t understand, and by an unstoppable drive to piece together the mystery that is his lost past. Balancing the deadly realities of his secret life as the world’s newest Hellspawn with the worldwide media frenzy as a new messiah for the Digital Age, Jim begins to embrace his abilities like never before. This all leads to a showdown with a classic Spawn adversary…

Thief of Thieves #6
The heist you’ve been waiting months to see goes down! Will Redmond – AKA Conrad Paulson – be able to pull this off, or will his final caper leave him behind bars, or worse… six feet under?