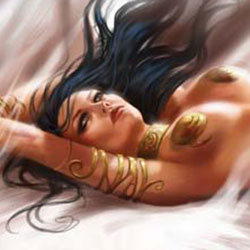 Dynamite Entertainment sent Major Spoilers a sneak peek of titles arriving in stores this week.  Take the jump for a look at The Boys, Vampirella: The Red Room, Warlord of Mars, Ninjettes, The Lone Ranger, Green Hornet, Kirby: Genesis – Captain Victory, Wheel of Time, and more.

THE BOYS #68
32 pages FC • $3.99 • Mature
Written by GARTH ENNIS
Art by RUSS BRAUN
Cover by DARICK ROBERTSON
The next bad day: the Boys compare notes and find that all is very far from being as it should be. MM wants serious words with Butcher, Hughie gets Monkey exactly where he wants him, the Female has a revelation of her own- and news comes in of yet another fatality. Things continue unravelling fast, in part three of The Bloody Doors Off.
4 ISSUES TILL THE END!

VAMPIRELLA: THE RED ROOM #2
32 pages FC • $3.99 • Teen +
Written by DAN BRERETON
Art by JEAN DIAZ
Covers by DAN BRERETON (33%), FABIANO NEVES (33%), ALÉ GARZA (33%)
Facing one super-charged fiend after another in a series of brutal death matches slowly takes it toll. A bruised, bloodied and broken Vampirella soon discovers a far more sinister fate awaiting her. After an evening of fighting to stay alive, the night has only pain and depravity in store at Rigger’s nearby compound.

WARLORD OF MARS #19
32 pages FC • $3.99 • Mature
Written by ARVID NELSON
Art by STEFANO MARTINO
Covers by JOE JUSKO (50%), LUCIO PARRILLO (50%)
Fans, ask your retailer for these variant incentive covers!
LUCIO PARRILLO virgin art cover retailer incentive
“RISQUÉ ART” cover retailer incentive
John Carter has freed Mars from Issus, the false and now thoroughly dead goddess who once ruled the entire planet. In doing so he lost his one true love, the princess Dejah Thoris, but there’s no time to mope–renegade priests of Issus have activated a doomsday device that will destroy Mars’s fragile atmosphere, unless Carter can figure out a way to shut it down. He and his son, Carthoris, have no choice but to turn to the people they most despise, the Holy Therns. Carthoris catches the eye of a beautiful thern princess, but what will his father think?

NINJETTES #5
32 pages FC • $3.99 • Mature
Written by AL EWING
Art by EMAN CASALLOS
Cover by ADMIRA WIJAYA
Fans, ask your retailer for these variant incentive covers!
ADMIRA WIJAYA virgin art cover retailer incentive
POW RODRIX “RISQUÉ ART” cover retailer incentive
It all comes together as Kelly, Skyler and Chelsea finally become the Ninjettes… and select their first kill! Guest-starring: Blood! Not Jennifer Blood, just gallon after stickily coagulating gallon of people’s blood, all over the walls and the floor and the cat and even in your hair! SO MUCH BLOOD. YOU’LL NEVER BE CLEAN.

THE LONE RANGER VOL. 2 #7
32 pages FC • $3.99 • Teen +
Written by ANDE PARKS
Art by ESTEVE POLLS
Cover by FRANCESCO FRANCAVILLA
It’s new territory and a new arc for the Lone Ranger. With Tonto gravely wounded, the Ranger seeks help from a Ute Indian Shaman. As the Ute decide whether to offer help or simply kill the Lone Ranger on the spot, we begin to learn the secrets of Tonto’s past. How did Tonto come to be the brave without a tribe who discovered John Reid after the Cavendish gang’s ambush? All will be revealed in the Native Ground arc. Part one of six.

GREEN HORNET #26
32 pages FC • $3.99 • Teen +
Written by ANDE PARKS
Art by RONAN CLIQUET
Covers by PHIL HESTER (33%), JONATHAN LAU (33%), BRIAN DENHAM (33%)
He’s been set up for murder. He’s been forced to battle a deadly doppelganger and left for dead. Now, Green Hornet must fight an entire city. A power-mad politician hopes to rule Century City on the back of the “villain” known as Green Hornet. Now, the city that Green Hornet and Kato have sworn to protect turns on them completely, and help arrives from the most unlikely source. The epic “Outcast” arc screams toward a conclusion that will forever change the legacy of the Green Hornet.

KIRBY: GENESIS – CAPTAIN VICTORY #6
32 pages FC • $3.99 • Teen +
Written by ALEX ROSS, STERLING GATES
Art by JOE ST. PIERRE
Cover by ALEX ROSS
“Virgin Art” Retailer incentive cover by ALEX ROSS
Following the disaster of Ilili, Captain Victory and his crew race back to Ranger Center to confront the traitor in their midst! But the traitor’s got a secret weapon of his own aboard the Dreadnaught Tiger, a sleeper agent activated if Victory ever discovered what was really happening within the Galactic Command. Victory is forced to fight one of his own as Tiger 20 attacks!

DREADSTAR OMNIBUS VOL. 1 COLLECTION
376 pages FC • $29.99 • Teen + • (C:0-1-2)
Written by JIM STARLIN
Art and covers by JIM STARLIN
The first complete chapter of Jim Starlin’s epic saga, collected in one volume, chronicling the adventures of Vanth Dreadstar, last survivor of the destroyed Milky Way Galaxy.  Dreadstar finds himself transported to the Empirical Galaxy, where he is recruited by the sorcerer Syzygy Darklock to help bring an end to the 200-year-old war between the corrupt Monarchy and the fanatical Instrumentality.