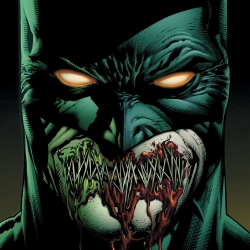 The writer of Penguin: Pain and Prejudice has set his sights on a new villain… Jonathan Crane, aka The Scarecrow! Major Spoilers got a chance to interview Gregg Hurwitz recently about the title, and now takes a look at how his writing blends with long-time Bat-artist David Finch in The Dark Knight #10!

Previously in Batman: The Dark Knight:  It’s been bad. Really bad. This title has been pretty lousy, and the previous writer, series artist David Finch, even admits he wasn’t ready to write Batman yet. But now that bestselling novelist and writer of DC Comics’ Penguin: Pain and Prejudice Gregg Hurwitz (who I just interviewed for Major Spoilers) is on the title, expect great things from The Dark Knight!

One of the things I’ve noticed in comic books written by novelists (Brad Meltzer’s work on Justice League of America and Identity Crisis, as well as China Mieville currently on Dial H for Hero) is how sharp and well-written the dialogue is. It’s obvious that Hurwitz has a lot of writing experience, and he is a commodity that DC really needs to hold onto. Penguin: Pain and Prejudice is probably my favorite book so far in The New 52, and I think a lot of people enjoyed that title—with The Dark Knight ranking in the Top 10 comics sold to retailers on a monthly basis ever since the relaunch, Hurwitz is going to get a lot of exposure and I think that fans are going to really enjoy his work.

Bruce Wayne has had half a dozen or so girlfriends in The New 52 so far, but the Ukrainian pianist Natalya seems to be the best match for the Detective so far. From the first scene we see her, in which she predicts step-by-step how Bruce is going to blow her off as soon as Alfred calls for him, it’s clear that she isn’t your standard Wayne girl. Later in the issue, she makes a comment that cuts very deeply into the pathos of Bruce Wayne as she says “You care about everyone you don’t know. Ever wonder why that is?… You’re there for the black-tie balls and the grand openings, but not for the daily stuff.” That will clearly be a recurring theme in Hurwitz’ Dark Knight as we see it repeated through the duality of Bruce’s reaction to a Scarecrow victim named Clair and his reaction to his own son, Damian.

David Finch is an incredibly talented artist, and he really shines when drawing Batman and Gotham City. As I’ve mentioned several times on the website, I initially picked up Penguin: Pain and Prejudice for Szymon Kudranski’s art, and it complemented Hurwitz’s writing so beautifully that I was a bit bummed out that his next outing was going to be with Finch instead of Kudranski—but from the very first page where Jonathan Crane sews his mouth shut, I was on board. I also loved how on the splash page Finch used the glass to spell out the “Hollow Man” title of the arc; I’ve always been a sucker for incorporating the title into the art, something that Francis Manapul excels at doing in unique ways.

There’s only one page where I don’t think Finch is doing his finest work in this issue, and I don’t know if it was his fault or a problem with either the inks, coloring or printing, but on the page that opens with “G.C.P.D. Headquarters…” most of the art lacks definition. I’m not sure if that was supposed to be the spotlight washing things out, or if there was just a mistake somewhere in the artistic process, but that’s really the only complaint of any sort I have with this issue.

THE VERDICT: The Ultimate Jumping On Point (and you SHOULD jump on)

Batman: The Dark Knight is a title that has sold incredibly well, but has not fared well in reviews due to poor and inconsistent writing. This marks the dawn of a new era with an incredible writer and the same gorgeous art that the title’s always had. DC Comics is putting out a bevy of fantastic Batman books right now, with Scott Snyder’s Batman getting the most critical acclaim and Morrison’s Batman Incorporated getting in gear, but I have a feeling the Bat-book I’m going to be most excited for on a month to month basis is Batman: The Dark Knight, issue 10 of which I give a full 5 out of 5 stars.