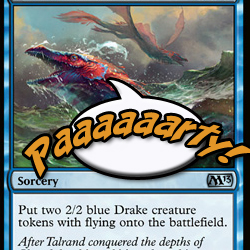 Two awesome days are approaching. One is the release of Magic: The Gathering 2013 on July 13 (spoilers are already out). the other is July 4th, Independence Day in the United States. This is a holiday that Americans celebrate, in true American fashion, by eating awesome food and blowing stuff up! What do the two of them have to do with each other? This:

Theme decks are a big part of what I like about Magic, so I wanted to take some of the spoilers for M13 and build a deck around the themes of July 4th celebrations mainly FRIENDS! FOOD! and FIREWORKS!

The main drive of this deck is the absolute legion of cheap token-making spells in M12 (plus a few stragglers from other expansions), your party will be hopping with goblins, soldiers, spirits and drakes all putting aside their differences and hanging out together. Of course, every party needs a host and no one’s more accommodating than Galvanoth, who lets you cast all your little token spells for free!

Ok, this one’s a little loose, but I figure since Eldrazi tokens make mana, they’re probably the main course. mmmmm, mana babbies! and if we’re stretching the mana making/food analogy (and we really are at this point) Don’t overlook Gleam of Resistance and Fiery Fall, both of which thin your deck and get you whatever land you need. You may be wondering why I didn’t include Traumatic Visions though; the reason there is that Galvanoth makes this deck unpredictable, so randomly casting a counter spell at nothing would be a waste. Worse still, with two galvanoths going you actually risk countering your own free spell! A lot of the choices I made for this deck were based on whether a spell could be equally effective cast from your hand or your library.

Of course I had to include Pyrotechnics! Not only is it a very versatile card it fits right in with the theme. Other F’thoom-BANG! includes spawning breath, and if you want to extend fireworks to “things that surprise people” then Rally the Peasants will fit right in.

Hope you enjoy Galvanoth’s 4th of July Barbeque! It’s even Red/White/Blue! Alterations to this deck are fairly easy, in fact I have a Red/White/Green version (Cinco de Mayo, if you will) that can fire amazingly.