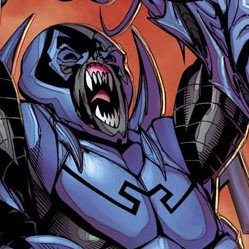 Kyle Rayner is wanted by the Oan Guardians, the Red Lanterns are tearing themselves apart with Bleez’s help, Arkillo is the last of the Sinestro Corps, and Saint Walker is struggling to save Odym from the Reach, can the New Guardians hold out? Take the jump for the Major Spoilers take on if they can.

Previously in Green Lantern: New Guardians: Odym, home world of the Blue Lantern Corps, is under attack by the Reach, aliens that created the scarab that powers Blue Beetle. The New Guardians have been split apart, each needing to do something at their own home worlds. Having heard the call for help, Kyle has just arrived at Odym to see the extant of the damage.

Kyle has just arrived at Odym and the planet is swarming with Reach ships. He is quickly joined by Fatality, Arkillo, and the Weaponer (former Sinestro, now working for/with Arkillo). After some foreshadowing from the Weaponer, we join Saint Walker and the Blue Lanterns trying to defend the power battery and showing us exactly why they are Hope’s light. Despite getting their butt’s kicked everywhere, despite having setbacks with every tactic, despite fighting a losing fight, they still come out swinging with the chant of “ALL WILL BE WELL!” the Blue Lantern motto. We are also shown just how much of a leader Saint Walker is as he is the one rallying the troops and forming the plans. Then the reinforcements arrive, and things start getting worse.

While the fight continues, the Reach are very much getting the upper hand overall. The Lanterns are able to take out individual soldiers, but the target is the Lantern and Odym itself, which the Reach is slowly taking. Fatality’s crystal shield is shattered after a few moments, Arkillo’s ring malfunctions, as per the Weaponer’s foreshadowing, and even Kyle’s arrival, powering both him and the Blue’s up, is only able to convince Saint Walker to retreat, giving us a threatening and downer ending that works well for both a set up for next issue and a final cap on the tone of the book.

CONSTRUCTS, ALIENS, AND ELEPHANTS OH MY

I think the Blue Lanterns have the most diverse membership as, even though they are mostly humanoid, they are all very unique characters. Only one of them even has a human-like face. Then we get the constructs by four different corps with very unique personalities. Giorello gives us a phenomenal amount of interesting things to look at without sacrificing the focus of any given panel or character.

BOTTOM LINE: Hope you get it

Green Lantern: New Guardians #10 is a gorgeous book and a compelling story. Bedard is doing very well with a huge cast of main and supporting characters, making sure that while each one is getting a focus, some even a full focus issue, none of them are feeling too important compared to any of the other primary characters. Even the supporting cast has enough time to develop at least a little. With the group cut down and desperate, Green Lantern: New Guardians #10 earns a perfect 5 out of 5 stars from me, having found nothing I dislike about this book and everything being great.