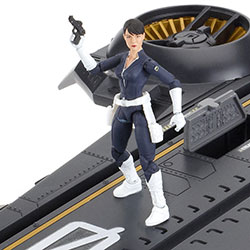 Hasbro has released the list of Marvel exclusives it is offering at the San Diego Comic Con, and for those who are looking to add to their toy collection, Hasbro has you covered.

MARVEL LEGENDS SPECIAL EDITION UNCANNY X-FORCE COLLECTOR’S PACK
(Approximate retail price: $49.99 each; Ages: 4 & up; Available through HasbroToyShop.com Booth #3329 at San Diego Comic-Con)
Collectors will have a chance to get their ADAMANTIUM claws on these X-FORCE figures in 6” scale for the first time!  Featuring ARCHANGEL, WOLVERINE, and PSYLOCKE in outfits from The Fall of Archangel story line, this set comes in a collectible display box with exclusive art by well known comic artist Clayton Crain! MARVEL UNIVERSE 3.75” MASTERS OF EVIL Special Edition 3-Pack
(Approximate Retail Price $29.99; Ages 4 & up; Available through HasbroToyShop.com, Booth #3329 at San Diego Comic-Con)
Fueled by a raging need for vengeance against CAPTAIN AMERICA, BARON ZEMO hatches a masterful plan. Not foolish enough to face the AVENGERS alone, he strategically forms one of the most powerful groups of villains ever assembled. The MASTERS OF EVIL 3-Pack includes BARON ZEMO, RADIOACTIVE MAN and TIGER SHARK all appearing in 3.75” scale, and united for a singular purpose: destroying EARTH’S MIGHTIEST HEROES. The villains can also be seen fighting against THE AVENGERS in the exclusive art by Joe Quesada on the SDCC exclusive THE AVENGERS HELICARRIER. (sold separately).