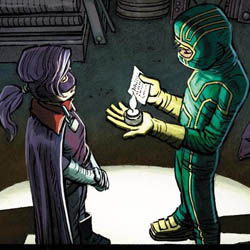 Or – “She Looks Really Weird On That Cover, Doesn’t She?”

I’ve been a fan of John Romita Jr. since his run on Spider-Man decades ago, and have appreciated Mark Millar’s work since the early 90’s.  When they work together, though, I find my opinion of their work to be all over the place.  Can Hit-Girl get past the novelty value of a foul-mouthed 12 year old murderess?  Your Major Spoilers review awaits!

Previously, in Hit-Girl:  After deciding to become a super-hero, Dave Lizewski found that it’s not as easy as it looks in the comics.  His best super-friend became his villain, while the only man who seemed to have it all figured out was brutally murdered.  In the wake of this first adventure (which, for those have seen the movie, was NOTHING like that), Big Daddy is dead, Hit-Girl is retired and Kick-Ass doesn’t realize that the mafia wants his head on a pike. This should end well…

(This story takes place before the events of Kick-Ass 2.)

The very first page of this issue reminds me why I have fallen away from Kick-Ass as the second mini came out, as the first three pages detail the graphic murder of “superhero” The Silver Beetle by mafia thugs trying to find Kick-Ass and Hit-Girl.  There are easily a dozen f-bombs or like curses, and it is clear that these are meant to make the usual cartoonish criminals seen in comic books look silly.  The problem is, they come across just as cardboard as any Spider-Man issue with “The Maggia” from the 70’s, and no amount of cursing overcomes that fact.  Hit-Girl’s home life is a little less daunting, as the juxtaposition of regular 10-year-old girl stuff with her tough dialogue (and her violent memories of her superhero training) still draws a little bit of a smile.  I recently wondered whether Hit-Girl was a one-note shock character or something entirely new, but this issue doesn’t help me to make my decision, as elements of both are present here.  If you don’t realize that this issue takes place BEFORE the events of Kick-Ass 2, things are confusing as well, but there is a perfectly beautiful scene in the middle of the issue, as Kick-Ass and Hit-Girl take a candle-lit oath to their new career as super-partners, just like Batman and Robin did back in the Silver Age.

I’m also a little bit touched at the sequence where a tearful Hit-Girl wonders why she can’t deal with a couple of pre-teen bullies, but the rest of the issue gets back to matters of the old ultra-violence and curses that would make Captain Haddock blush, with the revelation that Johnny Genovese’s even-more-evil brother (running things from his prison cell like Vern Schillinger in ‘Oz’) has taken over the operations, while The Red Mist has some really Oedipal moments while retrieving his comic collection.  The art is a little bit less consistent than usual, with Romita doing breakdowns rather than pencils, leading to a less-finished feel to the completed art.  Moreover, the whole story feels like it’s being shouted at me by a drunken guy with no indoor voice, pointing out all the awesome bits with an interjection of “Ain’t tha’ $$!+ $&@in cool?” at all the violent or sexy parts.  And for all her smarts, Hit-Girl can’t be the sharpest bulb in the barrel if she wants help fitting in from Dave, who is even something of an outcast among the outcasts.  (Although, given how meta the story is, that’s probably the joke here.)

THE VERDICT: WHY ARE WE ALL YELLING???

I like Kick-Ass.  I like Hit-Girl.  I even liked the Kick-Ass movie, which inverted enough of the tropes to completely undermine a lot of what made the original book sing.  But for some reason, this issue doesn’t quite hit all cylinders for me.  The parts of the book that are dedicated to Mindy work really well, and I enjoy the Red Mist (he hasn’t yet taken on his other name) in a creepy “I think I know that guy” sort of way, but this first chapter hasn’t quite sold me on the need for a bridge between Kick-Ass and Kick-Ass 2.  Hit-Girl #1 isn’t a bad issue by any means, but it captures a lot of the bombastic loudness of the original without as much of the charm and wit that made it stand out, earning a middle-of-the-road 2.5 out of 5 stars overall.  It’s not enough to sour me on the series, but it’s a troubling start for a book that I have been looking forward to…