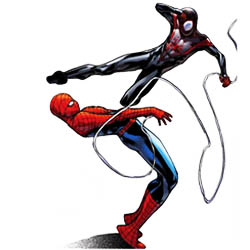 In the modern comics world, there is NO story that cannot be told.  Resurrect Bucky?  Done.  Captain Mar-Vell returns?  Done, done and done.  Batman’s parents as freaky-deaky super-villains?  Morrisoned.  And when Joe Quesada said they’d never mix the regular and ultimate Marvel Universe, there had to be a part of his mind that knew he’d have to eat those words.  Whether you love it, or hate it, we’ve got the Major Spoilers POV on the meeting of the (spider) minds…

Previously, in Spider-Men:  A garden variety run-in with Mysterio ended up being less predictable than usual when Spider-Man stumbled onto a dimensional portal that dispatched him to another world, where his costume is considered tasteless and his own name spoken in the hushed tones reserved for the honored dead.  And, then, another Spider-Man arrived to confront him, which might have ended in a mirror routine like Lucille Ball and Harpo Marx if I were writing the book.

“IS THIS A CLONE THING?”

The issue opens with the long-rumored reveal that the Mysterio from the Ultimate line of comics is the same Mysterio from the core 616 universe, using android avatars and a dimensional transporter.  Although this is kind of troubling (for one, I’ve never been 100% clear on how Quentin Beck returned from the dead, if he ever was actually deceased, and he and Spider-Man were working together in ‘Ends of The Earth’ literally just weeks ago), there is one beautiful touch that makes me smile in the first half of the issue.  When Ultimate Mysterio arrives in Miles’ universe, his word bubbles immediately switch from standard (read: all-caps) type to the mixed case typeface used in Ultimate line.  Peter Parker and Miles Morales, already in the Ultimate Universe, have the standard “meet hero, fight hero” misunderstanding, and even though there are cute surprise touches of character for both Spider-Men, it feels remarkably like the miniseries is already spinning it’s wheels to fill time.  I am pleased with the fact that Morales gets the upper hand on Parker during the battle, however, as it gives the new Ultimate Spider-Man immediate cache for those (like me) who aren’t familiar with him.

HOW LONG HAS THIS BEEN GOING ON?

A little bit of research has revealed that he first appearance of Ultimate Mysterio was in 2008, which doesn’t QUITE fit with the timeframe in which he “killed” himself back during Kevin Smith’s Daredevil run, but it’s interesting to think that his extended absence (during which TWO other Mysterios popped up) that Beck was in the Ultimate Universe mucking about.  Peter Parker awakens in a S.H.I.E.L.D. cell and has a conversation with Nick Fury (“I know the name…  and the eyepatch”, replies Spidey wryly) that leads to an entirely too quick resolution for my tastes.  Then, suddenly, EXPLOSION-TIME!!!  Spider-Man and Spider-Man escape an almost certain death by the skin of their teeth, and we fade out with the duo under attack by the Mysterio android.  From an art perspective, I like Sara Pichelli’s action sequences, and her Spider-Men swinging over the city scenes are first rate stuff, capturing the strange gymnastic motions that I associate with Spider-Man in action.  The art team is guilty of one of the things that I can’t stand in a Spider-Man book, though, using the “eyes” of Peter’s mask to cheat expressions, narrowing and widening them like normal human eyes.  Oddly, if the same technique is being used on Miles nearly-identical mask, it’s not noticeable in the book.

THE VERDICT: TALKY, BUT ENTERTAINING…

There’s a lot of hurry-up-and-wait in this issue, and I have problems with the pacing and the sheer amount of “Are you SERIOUS?” dialogue that we had to sit through on the way to some adventure.  Bendis has a good ear for Spider-Man dialogue here, and I do enjoy Miles as a character, but the entire issue breaks down to “Conversation-Quick Battle-Conversation-BLAM!”, which doesn’t make the experience an entirely satisfying one at the end of the issue.  Spider-Men #2 is cute, and as a chapter of the inevitable trade paperback for which it seems to be written, it does well enough, earning an above-average 3 out of 5 stars overall.  It’s interesting to watch the two Spider-Men play off one another, but there’s not quite enough meat on this book’s bones to make a superlative issue…