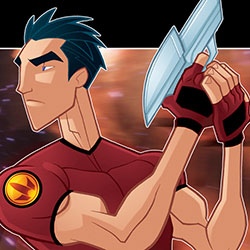 After a huge box office for comic books adaptations this year, Bluewater Productions is excited to announce a new partnership with Pleroma Entertainment, an independent motion pictureproduction company. With this partnership, the comic book publisher will allow Plemora to produce films based off of Bluewater properties. Pleroma plans on optioning Bluewater’s comic books  “Insane Jane” and “Tom Corbett: Space Cadet”.

“Insane Jane,” named for its crazed, mentally unstable heroine, lends itself the big screen. “Tom Corbett: Space Cadet” also stars a movie-ready hero who harkens back to the retro space heroes of the 1950s.

INSANE JANE: Take youthful energy. Add in some over-active imagination. Mix in some powdered donuts. Sprinkle it with delusional disorder and you get … Insane Jane! The kookiest action hero of the 21st century. Will Jane save the day? Will Jane destroy the world? Will she remember to take her medication?

TOM CORBETT SPACE CADET: Based on the novel series by Carey Rockwell comes Tom Corbett: Space Cadet. Juggling schoolwork, cadet training and saving the world Tom is on the adventure of his life in his new adventures.  The Corbett comic book was transformed earlier this year into an audio drama on Sirius/XM with Colonial Radio Theatre.

“We could not be more thrilled to team up with Pleroma Entertainment. ‘Insane Jane’ and ‘Tom Corbett: Space Cadet’ are two comic books that we thought would make great properties for film and television when we created them,” said Darren Davis, President of Bluewater Productions.

“The partnership between Bluewater and Pleroma presents an opportunity for us to produce two, if not more, of Bluewater’s most popular books as feature films. It is a partnership that I have personally looked forward too for many years and it is a good thing for both companies. Together, we are going to make greatthings happen,” said Ray Brown, CEO and producer of Pleroma.

Bluewater also has film projects set up with Universal Studios and Paramount Picture and other studios for their titles “Nanny & Hank,” “Legend of Isis,” “10th Muse,” and “Sinbad Rogue of Mars.”  Bluewater also developed a comic book called “Wrath of the Titans’.

Both Insane Jane and Tom Corbett Space cadet are in graphic novel form and can be purchased at comic book stores, bookstores and on Amazon.