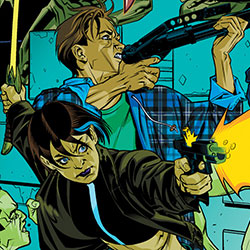 An action-horror OGN starring teenagers with super-powers who are the ‘monsters’ we’re all afraid of.

Seventeen-year-old Madison Thomas and her twin brother Lincoln just moved to Yuma, Arizona, following their mother’s death. Madison quickly falls for Kevin, the leader of the most feared clique in high school. After a crazy night of partying – she becomes afflicted with an amazing power. And you know what they say… With great power comes great irresponsibility.

Brought to you by Shane Riches (writer) and Jose Holder (artist) the team behind Mick Foley’s R.P.M.!

See for yourself why ComicBookResources.com calls THE RIDE “…A CHILLING MASTERPIECE IN BLEAK STORYTELLING”!  The best in crime & action, with a taste of the south you’ve never experienced– featuring brothers on mission of vengeance, a daring rescue, and a tale of the Devil Himself.

Zachary and Jordan’s search for answers has pointed them in the direction of the mysterious reverend Charles Emmanuel. Their hunt leads them to a demon stronghold, where they are attacked like never before.  Emotions run high and secrets are revealed in this action-packed issue!