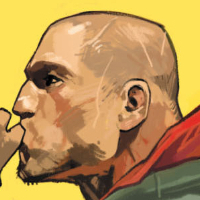 The new comic on the block, Saga, has fans raving about how wonderful this series is with every issue. Will issue four hold up to the standard set by the previous three? Take the jump and find out!

Previously in Saga: While the newly formed family trekked on through Cleave, The Stalk caught up to them and stabbed Marko through the chest. In an attempt to save him, Alana allowed the ghost Izabel to join her spirit with baby Hazel. As the troupe neared the location to allow Marko to heal himself he began muttering about his lover Gwendolyn, now he’s got some explaining to do.

“THEN CLOSE YOUR EYES”

Issue four of Saga focuses on developing the characters more than creating action sequences. On the mountainside, Marko is forced by Alana to bring up memories of the horror of war and his lover, Gwendolyn, that he left behind. Brian K. Vaughn handles this tense conversation masterfully by bringing out each half of the couples’ voices, while pacing it in for it to feel like a fight between two people that love each other.

The more interesting character development was that of freelancer The Will. The Will lands on the Sextillion blimp to escape his feelings by engaging in what the roaming fantasyland’s name suggests. Though when he is surrounded by all manner of sexual opportunities he looks to be in a state of depression and, once led to a private level, we learn that even a Freelancer has a line he won’t cross.

The manner with which BKV is unfolding this epic is working well. His ability to string pages of dialogue together without the feeling that the story is dragging makes the action that is sprinkled in seem even more dramatic. With the cliffhanger we are given it would seem that issue five will certainly offer up more action though.

Fiona Staples isn’t being paid enough. Let me state that I have no idea how much she is being compensated for creating page after page of beautiful work, but I know it can’t possibly be enough. Her depiction of The Will walking through the corridors of Sextillion looking utterly un-enticed made the sexual activity surrounding him seem less alluring. Fiona’s use of flipping the perspective of Marko and Alana’s discussion about Gwendolyn depicted Marko’s horrifying memories of the war and how he is still feeling their effects today. But what completely sold me on her art? One word: Dinosaur Dildo.

Saga #4 is an example of a book that should not only be on your monthly pull list but also on the top ten selling list every month. Brian K. Vaughn and Fiona Staples are putting together a book that is doing the seemingly impossible by topping itself issue after issue. I could keep on gushing but that would take time away from you reading this brilliant series. 5 out of 5 stars. Go buy it now.