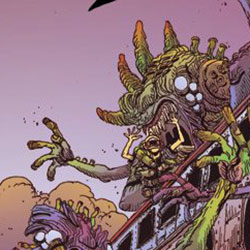 Kickstarter sensation Sullivan’s Sluggers, the pending graphic novel from creators Mark Andrew Smith and James Stokoe, will debut as a series of single issues with issue #1 premiering today exclusively on comiXology — the world’s largest digital comics platform with over 75 million downloads to date. Earlier this month, Sullivan’s Sluggers took the internet by storm with a Kickstarter campaign that outperformed even the most wild expectations. Now, fans won’t have to wait one more day to experience a taste of the Sullivan’s Sluggers graphic novel with Sullivan Sluggers #1 on comiXology today.

Sullivan’s Sluggers quickly became an internet phenomenon after its Kickstarter campaign surpassed its initial goal of $6,000 and almost hit $100,000 in the 30-day campaign. The graphic novel was also optioned for adaption to the silver screen before the Kickstarter campaign even ended.  Created by Mark Andrew Smith and James Stokoe, the team behind Sullivan’s Sluggers didn’t want to wait until the graphic novel was printed to get it into the hands of fans, so they approached comiXology to serialize the graphic novel over six single issues.

“We’re excited to be able to bring Sullivan’s Sluggers to comiXology before the graphic novel comes out in print,” said comiXology co-founder and CEO David Steinberger. “It was great for comiXology to be counted among the early incentives for the book’s backers during the Kickstarter campaign and now we can’t wait to let the rest of the world in on this bloody great comic.”

“ComiXology is the premier place for digital comics,” said co-creator Mark Andrew Smith. “Releasing Sullivan’s Sluggers with comiXology’s unique one-two punch reading experience of CMX-HD and in their revolutionary Guided View gives fans something different than with the print graphic novel. From shopping to reading, there just isn’t anything else out there that touches comiXology.”

Sullivan’s Sluggers tells the story of a down and out minor league baseball team and their Coach, Casey Sullivan, as they face off against a terrifying legion of undead monsters in an epic fight for survival. When America’s favorite past time becomes one team’s ultimate nightmare, hilarity, horror and one killer comic ensues. Available across iPhone, iPad, Android, Kindle Fire, the Web and the comiXology retailer digital storefronts, Sullivan’s Sluggers #1 (of 6) is out today.
About comiXology
Founded in 2007 with the mission of bringing comics to people everywhere, comiXology — in just five short years — has revolutionized the comic book and graphic novel world. From creating the industry leading platform for digital comics to tools and services for brick and mortar retailers, comiXology has lead the charge in exposing new audiences to the rich history and culture of comic books. With the development of the Comics by comiXology digital comics platform — available across iPhone, iPad, Android, Kindle Fire and the Web — comiXology provides the easiest way worldwide for people to enjoy comics at just the click of a button! Regularly ranking as the top grossing iPad app in the entire iTunes App Store, Comics by comiXology was recently selected as a preloaded app on Amazon’s Kindle Fire. Providing digital comics across multiple platforms, comiXology will not stop until everyone on the face of the earth has been turned into a comic book fan.