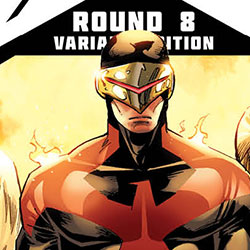 AVENGERS VS X-MEN #8 (MAY120643)
AVENGERS VS X-MEN #8 KUBERT VARIANT (APR128210)
Written by BRIAN BENDIS
Penciled by ADAM KUBERT
Cover by JIM CHEUNG
Variant Cover by ADAM KUBERT
Now that the Cyclops has declared “No More Avengers”, Earth’s Mightiest Heroes are on the run! The chase comes to a head in Wakanda, as the sovereign nation becomes the target of an out-of-control Namor! Will the onslaught of the powered-up Sub-Mariner overwhelm the Avengers?