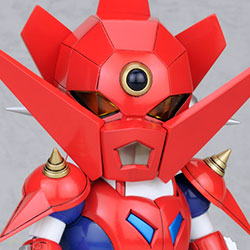 Yamoto has announced a new garage kit series called Metal Box that features over 20 different characters.  The first in the series is Metal Boy, and we’ve got your first look, after the jump.

Metal Boy debuts as a “Gokin Toy”! From a very popular garage kit series “Metal Box” for its over 20 different SD characters in its line and its integrated size, here comes “Getter Dragon” pre-painted and pre-assembled die cast toy! Enjoy the new version of Metal Box with upgraded play value such as fully articulated joints, more optional parts, LED eye gimmick based on the original garage kit form! “METAL BOY” Series finally released in die cast toy! Maximum amount of die cast is used! Integrated SD body form is maintained in this series. Enjoy the feel of its volume, weight and its metal texture! Full Articulation enables its conversion into Flying Mode! On top of being upgraded in die cast form, each joint has been fully articuleted, as a result, you can enjoy the cute but, yet cool posing as you please! With its dual neck joint and newly added “Mach Wing”, you can enjoy its typical “Super Robot Flying Pose!” The figure begins shipping in September, stands just over 8-inches high, and has a suggested price of $119.99.