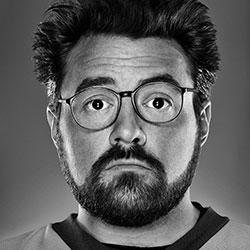 Star Wars Celebration welcomes writer, director, and fanboy Kevin Smith to a galaxy far, far away! Star Wars Celebration, taking place August 23-26, at the Orange County Convention Center, is the world’s biggest Star Wars party, featuring events, activities, and special guests from the theatrical Star Wars saga through Star Wars: The Clone Wars and all the books, comics, toys, and games in between! Guests include names tied to the core of the Star Wars saga such as Carrie Fisher (Princess Leia) and Ian McDiarmid (Emperor Palpatine) as well as celebrity fans including Seth Green (Robot Chicken) and Chris Hardwick (Nerdist).

Now, Star Wars Celebration is excited to have Kevin Smith make his Celebration debut, kicking off the convention with a special “Evening with Kevin Smith” on August 23rd!

Kevin will be appearing for an evening of stories and conversation in the Orange County Convention Center’s Chapin Theater, discussing his career, his fandom, and how Star Wars intertwines both. Smith, most known for the world he created in Clerks, and since expanded in Mallrats, Chasing Amy, Dogma, Jay and Silent Bob Strike Back, and Clerks II, has also written, directed, and produced projects including Cop Out and Red State. In the comics world, he’s penned stories for heroes including Spider-Man, Daredevil, Green Arrow, Batman, and Green Hornet. Online, Smith is behind the SModcast podcast and SModcast Internet Radio channel featuring regular weekly podcasts from Smith and over 20 of his contemporaries and collaborators.

Smith has yet to work officially on a Star Wars project, but his is the voice of the zeitgeist in the pop culture world, and he’s long been a fan of the Star Wars saga, with its characters, elements, and fan paraphernalia a part of many of his works. Smith will be coming to Star Wars Celebration to speak about his long love-affair with Star Wars, how it shaped his youth, and how it still informs his career.