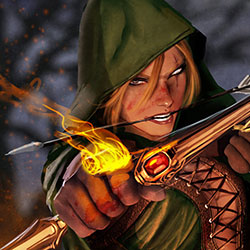 The five issue mini-series will be released this September and is available for pre-order in the July issue of Diamond Previews. Zenescope’s newest re-invented character has a trio of stellar artists bringing her to life for the covers of the number one issue.  Those artists are the renowned Eric Basaldua, Greg Horn and Stjepan Sejic.

Zenescope’s version of Robyn Hood puts an updated and reinvigorating twist on a classic tale by re-inventing the main character as a female heroine.  The story begins in the city of Bree within the Grimm Fairy Tales realm of Myst.  There, a tyrant rules with an iron fist and the city’s people are desperate for a savior. Meanwhile, back on Earth, Robyn is “the new kid” at an upper class high school and she quickly learns just how out of place she feels in this world.  But when Robyn is summoned to the realm of Myst, she will learn that an entirely new life awaits her and the fate of a mythical city rests solely in her hands if she chooses to accept it.

“Robyn Hood is the story I’ve been waiting to tell. We’re taking this girl, who pretty much has everything good in her life taken from her, and we watch as she evolves into a hero.” states series writer Pat Shand. “Like Katniss Everdeen, Robyn is a strong female character that realizes what her destiny is but approaches it on her own terms.”

Zenescope Entertainment has seen significant success with new titles that have launched this year, which include Alice in Wonderland and The Jungle Book.  Both titles have been critically acclaimed and are expanding an already dedicated fan base for the company. About Zenescope Entertainment
Zenescope Entertainment was founded by Joe Brusha and Ralph Tedesco in 2005 and has quickly grown into one of the top comic book and graphic novel publishing companies in the world.  Zenescope’s Grimm Fairy Tales and subsequent spinoff series such as the Wonderland trilogy, Neverland and Inferno, which put a dark twist on classic fables, are some of the best-selling and longest running original independent comic books on shelves today.  Zenescope’s licensed titles include the on-going, critically acclaimed Charmed series, based off of the long-running popular television series, as well as Se7en and Final Destination, based off of New Line Cinema’s successful film franchises.