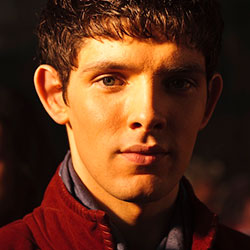 As it readies for its fifth season, the magical adventure of MERLIN returns to Comic-Con International when actors Colin Morgan and Katie McGrath, along with co-creators and executive producers Julian Murphy and Johnny Capps, lead a surprise-filled panel on Sunday, July 15.

The 10:30 a.m. panel, in Room 6BCF, will feature a Comic-Con-exclusive sneak preview of the upcoming season of MERLIN – which last season attracted its biggest audiences ever on both Syfy in the U.S. as well as BBC One in the U.K.  Comic-Con fans will be the first in the world to get a glimpse of exactly what will become of the wickedly beautiful Morgana (Katie McGrath), the fate of King Arthur and Queen Guinevere, and the role Merlin (Colin Morgan) will play in the future of Camelot. The MERLIN panel will also feature a brand-new, fan-favorite blooper reel created by the producers especially for Comic-Con, as well as details of the soon-to-be-released MERLIN Facebook game.
It’s part of the growing magic of MERLIN, which fans at Comic-Con will also hear about – including an upcoming YouTube channel that will feature behind-the-scenes videos, deleted scenes and other special material from all four seasons of MERLIN.
Since its broadcast debut in 2009, MERLIN has become one of the most popular fantasy dramas in the world, winning acclaim from both critics and audiences.  In its fourth season, MERLIN drew more than 8 million viewers in the U.K., while its U.S. ratings were its biggest ever – topping 2 million viewers – since it began airing on Syfy in 2010.
The series is produced and created by Shine Ltd. and distributed globally, in more than 180 countries, by FremantleMedia Enterprises.  Its fifth season is currently in production in Wales and France. MERLIN also stars Bradley James as Arthur, Angel Coulby as Guinevere, Richard Wilson as Gaius, and John Hurt as the voice of the Great Dragon Kilgharrah.  The fifth season of MERLIN will begin airing this fall on BBC One, followed shortly by its U.S. premiere on Syfy.
Fans can keep up with all the latest news from Camelot at the Official MERLIN Facebook page or by following @MerlinOfficial on Twitter.