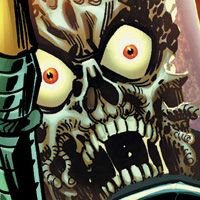 Way back in the 90’s Tim Burton captured my imagination with his film adaptation of the trading card series, Mars Attacks. Now it’s 2012 and writer John Layman is at the helm to take the property into the funny pages. Will the first issue meet my anticipation? Find out now!

Previously in Mars Attacks: Green men with giant brains and tiny hands landed on Earth giving the international signal for donut, but it was clear when the vaporizations started that they weren’t here to collect their free, hot Krispy Kreme. These Martians want one thing: destroy Earth.

INVASION WITH A PURPOSE

From what I remember of the 90’s movie, the Martians never gave a reason for their invasion of Earth, apparently it just sounded like fun. But that wasn’t working for Layman, who through the issue gives a legitimate reason for the invasion and destruction of Earth. Another change Layman has gone with is that the Martians are able to survive without their air-helmets, seeing as the main alien is without his most of the issue.

General Zar is the central character for this series opener, which revolves around he and his fellow Martians crash landing on Earth with Zar being sold by hillbillies to a traveling carnival. The carnival boss’s mistreatment of the Martian sets off a signal to the surviving members of Zar’s ship, bringing them to the fair grounds ready for a fight. From there blood is shed on both sides and Zar is the only Martian to make a safe get away.

I enjoyed the story that is being built here, but I did have an issue with the pacing. In the first ten pages there were three instances of redesigned trading cards that tell us what we are about to see. I understand that the cards were the catalyst for the movie and now comic to be created, but integrating a new version into the story stalled the flow of the book. From page eleven to the end no cards were used and I was totally caught up in the story. Hopefully the cards are left out of future issues, but with the numbering trend already started that’s unlikely to happen.

DARK SIDE OF THE MARTIAN

When I eventually compared the alien design between the Burton’s film and the trading cards it seemed the movie tried not to be as menacing as the cards were. In contrast, McCrea has embraced the sinister nature of the Martians, not only in their appearance but through their violent actions as well. And speaking of violent actions, the blood shed and body vaporizations look fantastic.

With Mars Attacks #1, Layman and McCrea have established they aren’t here to rehash the story that has spilled out from the card line and movie. There were certain faults with the way the story was presented, but I think Mars Attacks will be another series that allows John Layman to produce wacky, engaging stories. I’m giving the opener for IDW’s newest licensed property 3.5 out of 5 stars, with the recommendation for fans of the previous iterations to pick it up.