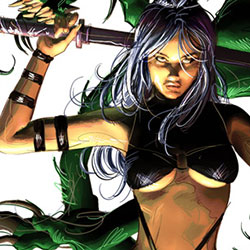 Once upon a time, after superstar artist Mike Deodato’s first incarnation as a hot artist for Marvel Comics on The Avengers, Hulk, Elektra, and other titles, Deodato wandered off to try new things.  He drew some issues of Batman and Lady Death, had a whole collection of originally-published-in-Brazil “Deodato Comics” come out from Caliber Press and, most fascinating, co-created and drew the mini-series JADE WARRIORS for Image Comics.  Four total issues of JADE WARRIORS were published, and the concluding issues were never published.

Incorporating Deodato’s “Ramthar” character originally published in Brazil and vested with all the exotic trappings that Mike Deodato’s fans wanted from him, JADE WARRIORS told the tale of Angel Sorayama, imbued with the power of a “Deathkiss” as part of a cult of female assassins fostered by the Yakuza for its own ends.  When she dared to escape this life, the hunter became the hunted.  One hell of an incentive package.  But that’s not all:  The Jade Warriors were originally a proud calling, one steeped in myth and tradition, preparing for the return of ancient Dragons imprisoned deep within the mountains of Japan.  And many myths are based in truth…as they discover when the Dragons return.

MIKE DEODATO’S JADE WARRIORS returns to comics as a twice-weekly serialized adventure on Keenspot.com this month, courtesy of Glass House Graphics and Red Giant Entertainment.   It is co-written by Michael Buckley and David Campiti, and illustrated by Mike Deodato, with some inks by Emir Ribeiro.

With the explosion of quality Internet based-comics and renewed interest in the series,  Keenspot pursued the project following the successful run of EXPOSURE by David Campiti and the late Al Rio, which currently continues with new stories.

Glass House Graphics CEO David Campiti explains, “It’s been far too long since anyone had a chance to see this popular series back when Image published the first portion.  Deodato was working quite hard on a lot of things at the time, at the time, but he really wanted to see this book happen.  So he put in extra hours at the drawing board  to draw some stunning issues.  It was truly a labor of love produced under pressure-cooker circumstances.”

Mike Deodato comments, “This was right at the point where I began changing from my “old” style to my current style, and it gave me a chance to experiment with new techniques and lay the foundation for the way I draw today.  Since I’m under exclusive contract to Marvel, I can’t do any new pages, but there’s plenty of artwork  that nobody’s really seen yet, since the entire mini-series was never published.

That’s why this run on Keenspot.com will not only publish the original work but also the remainder of the previously unpublished storyline.

Co-writer Michael Buckley is pleased by this turn of events, stating, “I really felt we had a good head of steam built up on the story, and the writing in the last few issues, to my mind, was the best of the whole series.  I’ve always regretted that fans never got to read the whole story, and now, they’ll have a chance to read it as it was meant to be.”