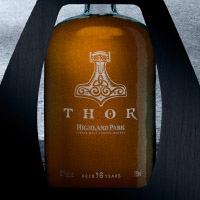 With the success of Avengers I expected to see more merchandise developed for each of the characters, but this is a product I never saw coming. Coming to a liquor store near you, Thor.

If Highland Park Single Malt Scotch Whisky had Thor picked for the name of their 16-year-old scotch originally then they are well ahead of the curve. The company will be distributing 23,00 bottles of Thor worldwide with only 1,500 showing up on American soil.

Highland Park had this to say about the flavor elements of a drink worthy of the gods:

Nose: Concentrated and forceful, with an explosion of aromatic smoke, pungent fresh ginger, antique copper, stewed plums, and golden syrup. With water, earthy notes emerge, like a garden after a heavy rain shower.

Palate: Thor’s high strength grabs the palate and refuses to let go. Initially dry, with fiery gingerbread, then vanilla, blackberries, fresh mango, peach, and hints of cinnamon. As its big flavours swirl around the mouth, some softer, sweeter notes develop, giving Thor an unexpected layer of complexity and depth.

Finish: The finish thunders on, leaving behind lingering notes of sweet vanilla and an intense spiciness. A bottle of Thor will sell for $199 and if you aren’t able to find it locally, order online from Highland Park and have it delivered.

via Comics Worth Reading