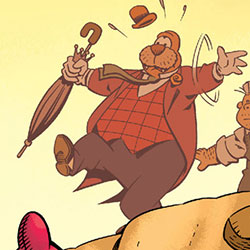 BOOM! Studios sent Major Spoilers a sneak peek of Snarked #9 by Roger Langridge, that you can check out, after the jump.

Harvey Award winner Roger Langridge (THE MUPPET SHOW, THOR: THE MIGHTY AVENGER) brings you the latest chapter of his critically acclaimed series SNARKED! Shipwrecked on a deserted isle with no food and no map, our heroes stumble upon an ancient, lost civilization. But when the Walrus and the Carpenter are treated like plump deities, will Scarlett and Rusty be able to pry them away from their feast before they become one?