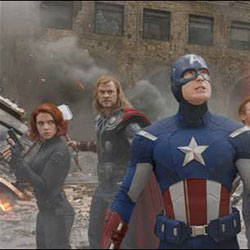 The Avengers have split their forces to face down the dual threat of the X-Men and the Phoenix Force.  Can even Earth’s Mightiest Heroes stand for long against this kind of assault?  Your Major Spoilers review awaits…

Previously, in Avengers:  The incoming threat of the Phoenix has brought Captain America to the X-Men’s doorstep, demanding that they turn over Hope Summers, the mutant messiah.  Cyclops’ response (a resounding “NERTZ!” with accompanying eyebeam) set off a chain reaction of battle that quickly spread around the globe as all the Avengers and all the X-Men (to wit: 84% of the Marvel Universe) have answered the call to arms.  The Phoenix Force has made it’s way to Earth, while the heroes fight on the surface of the moon, and it seems that all hell’s comin’ with the fire-bird.  Oh, and their newest member has betrayed the team at the behest of the Supreme Intelligence…

TO LIGHT OUR DARKEST HOUR…

I’ll admit it:  I am not particularly a fan of crossover tie-in issues.  It’s a hard row to hoe for the creators, as they want to make sure that their regular characters get time to breathe in the massive blah blah blah, but they don’t want to undermine the big event comic that’s (presumably) giving them a sales boost.  This issue takes place before Avengers Vs. X-Men #4, which makes things even weirder, as that was two full issues of the main title ago.  The space Avengers team (Thor, The Beast, War Machine, Captain Britain, The Vision, The Valkyrie and Ms. Marvel) is the focus of this issue, trying to avoid a fiery death after The Protector (ugh) turned on them last issue.  Walter Simonson is a phenomenal artist and does some really amazing work in this issue, but even his art can’t redeem the goofiness of the Protector’s helmet.  And since the Protector does the bulk of the dramatic heavy lifting in this issue, the goofy mask not only takes you out of the story, it damages the dramatic intent of Noh-Varr’s ‘Sophie’s Choice’ moment.

Decompression is in full effect, as this whole story consists of a conversation between Noh-Var and the Supreme Intelligence and a few tense moments in space before Thor just decides to get out and push.  As Thor stories go, it’s not bad.  As Avengers stories go, though, there’s not really any meat on the bones of the story, and the entire issue feels like it could have been told as cutaway panels in the main miniseries.  Simonson’s work is good, and I admit that there is mileage to be had out of Noh-Varr’s predicament at the end of the issue.  Worst of all, I’ve read two issues of the main series since these events were to have taken place, making it feel like not only a flashback, but a flashback without particular relevance to the plot.  Once again, one of Marvel’s core titles is rendered pretty much unreadable for anyone not involved in the events of the big crossover, and what story does happen in the issue could have been effectively told in a third of the space.

There is an upside and a downside to giant universal crossovers:  Your favorite guy or gal is usually not left out, but with EVERYONE involved, they may not do much more than stand around for reaction shots (as happens with Valkyrie this issue.)  The Avengers in this issue pointedly do NOT include several of the characters shown on the cover, and most of them don’t have anything to do anyway.  Avengers #27 is lovely to look at, but ultimately doesn’t do much more than flesh out the background of a comic that came out several weeks ago, leading to a crossover-shell-shocked 2 out of 5 stars overall.  Decompression and marketing have left this one signifying very little amongst the sound and fury of AvX.