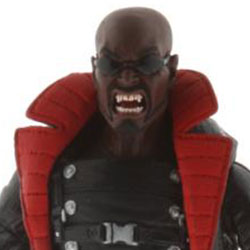 I’ve enjoyed the Marvel Legends line, as some of the sculpts have been fantastic.  This week, Marvel showed off three new characters coming to the toy line – Deadpool, Punisher, and Blade.

The good news is these are six-inch figures, and not the smaller four-inch line that vexes me down every toy aisle.  I like the attention to detail in the Punisher and Blade figures, but I wish we had the actual photos of Deadpool for a better frame of reference.  Deadpool has appeared in the line in 2010, so there’s a pretty good chance you have that figure in a different color somewhere in your bin of toys. The figures are sculpted by Clayton Crain and arrive in September, but I’m going to bet you will be able to see (and maybe buy) these figures at the San Diego Comic-Con.