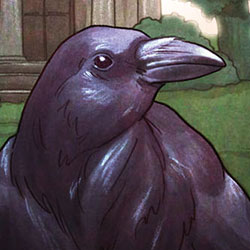 IDW Publishing is proud to announce another comic adaptation of a classic work by the beloved author Peter S. Beagle. Based on Beagle’s first fantasy novel, A FINE & PRIVATE PLACE kicks off in September, with scripts by Peter B. Gillis (The Last Unicorn), interior art by Eduardo Francisco (Flashpoint: World of Flashpoint), and covers by Jenny Frison (Servant of the Bones).

“It’s the kind of book that rarely gets the comics treatment: subtle, poignant, alternately cynically wry and utterly romantic, simultaneously despairing and hopeful—the sort of book that stays with you,” says Gillis. “This is going to be a great endeavor and, if I’m up to it, will make for great comics.”

Originally published in 1960, A Fine & Private Place tells the story of Jonathan Rebeck, an ex-pharmacist who has been living in a cemetery in the Bronx for the past 19 years. Cared for by a talking raven, Mr. Rebeck also has the strange ability to talk to ghosts. The first issue of A FINE & PRIVATE PLACE launches into Mr. Rebeck’s peculiar world and introduces readers to the unique characters of the story, including the talking raven, two unusual spirits, and an all-too-living widow named Mrs. Klapper.

“First books are always special to writers,” says Beagle, “and this one is particularly important to me because it was born directly from a childhood spent just a block away from the cemetery that was the model for the novel’s setting. I’m thrilled to see my characters and their tale come to life in this new form.”

IDW’s adaptation of A Fine & Private Place will feature the same quirky humor, rich characterization, and deeply moving emotion that marks all of Beagle’s work. Gillis has previously adapted Beagle’s The Last Unicorn with great success and will continue to prevail with this new adaptation. Additionally, artists Francisco and Frison will bring this book about memory, love, and the pain of loss to vivid life.