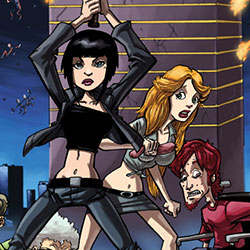 Before you head to your local comic book store, take a moment and check out the sneak peeks of Image Comics titles that are available today.

Alpha Girl #3
After last issue’s blackout ending, Judith wakes to find herself trapped in a freaky new world. Who are the men in rubber suits? Will she escape her clinical cage? What waits for her in the outside world, and who the hell is Frank? Suburban Wasteland not only brings the terror, but will have you spitting beer out your nose.

The Bulletproof Coffin: Disinterred #5 (of 6)
“THE HATRED OUT OF SPACE”
A planet full of hate explodes and aeons later a meteorite lands on Earth, resurrecting a platoon of US soldiers. The full story of The Hateful Dead, featuring art from the legendary set of bubblegum cards, reproduced as full-size paintings.

Dancer #2
“BALANCE”
The assassin has Alan in his sights, and the retired operative discovers exactly what he’s up against. Soon the stage will change theaters as the assassin uses the most vicious tactics to control the fight. Snow begins to fall on central Europe as the deadly dance begins.

Invincible #92
CORY WALKER RETURNS TO INVINCIBLE… AGAIN!
What has been going on with Monster Girl and Robot? What happened to them while they were in the Flaxan dimension? All answers will be revealed – starting now! Meanwhile, trouble is brewing in the present and the New Invincible is already in over his head! All this – and where is Mark Grayson?!

Planetoid #1
Silas, an ex-soldier turned space pirate, finds himself stranded on a mysterious planet in alien territory. As he explores the long-abandoned industrial ruins of the planet’s surface he will have to fend off rogue mechanical creatures, roving cyborg militias, and a hostile alien military with a bounty on his head. Silas will have to rely on resourcefulness and bare-bones survival tactics in order to stay alive and ultimately unlock the secrets of a planet where survival is a luxury and escape an impossibility.

Skullkickers #15
“SIX SHOOTER ON THE SEVEN SEAS,” Part Three
Our real cover is a CRAZY SPOILER of glorious secrets inside so we CAN’T show it to you here! Until release, enjoy this NOT FINAL COVER image of a CUTE KITTEN. This issue: heinous violence, trouble making and all the skullkicking you can handle. (If you love the kitten cover, let us know… maybe we can work something out).